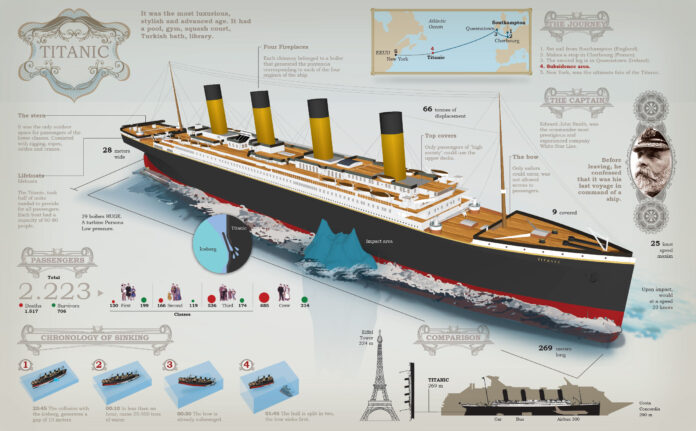 (www.MaritimeCyprus.com) RMS Titanic – A passenger ocean liner and, at the time, the world’s largest ship. On 14 April 1912, on her maiden voyage, she struck an iceberg, buckling part of her hull and causing her to sink in the early hours of 15 April. 706 of her 2,224 passengers and crew survived. Her loss was the catalyst for major reforms in shipping safety and is arguably the most famous maritime disaster, being the subject of countless media portrayals.

The sinking of the RMS Titanic occurred on the night of 14 April through to the morning of 15 April 1912 in the north Atlantic Ocean, four days into her maiden voyage from Southampton to New York City. The largest passenger liner in service at the time, Titanic had an estimated 2,224 people on board when she struck an iceberg at 23:40 (ship’s time)[a] on Sunday, 14 April 1912. Her sinking two hours and forty minutes later at 02:20 (05:18 GMT) on Monday, 15 April resulted in the deaths of more than 1,500 people, which made it one of the deadliest peacetime maritime disasters in history.

Titanic received six warnings of sea ice on 14 April but was travelling near her maximum speed when her crew sighted the iceberg. Unable to turn quickly enough, the ship suffered a glancing blow that buckled her starboard (right) side and opened five of her sixteen compartments to the sea. Titanic had been designed to stay afloat with four of her forward compartments flooded but not more, and the crew soon realised that the ship would sink. They used rocket flares and radio (wireless) messages to attract help as the passengers were put into lifeboats. However, in accordance with existing maritime practice, the ship was carrying far too few lifeboats for everyone (though slightly more than the law required), and many boats were not filled to their capacity due to a poorly managed evacuation.

The ship sank with over a thousand passengers and crew members still on board. Almost all those who jumped or fell into the water died from hypothermia within minutes. RMS Carpathia arrived on the scene about an hour and a half after the sinking and had rescued the last of the survivors in the lifeboats by 09:15 on 15 April, little more than 24 hours after Titanic ’s crew had received their first warnings of drifting ice. The disaster caused widespread public outrage over the lack of lifeboats, lax shipping regulations, and the unequal treatment of the different passenger classes aboard the ship. Inquiries set up in the wake of the disaster recommended sweeping changes to maritime regulations. This led to the establishment in 1914 of the International Convention for the Safety of Life at Sea (SOLAS), which still governs maritime safety today.