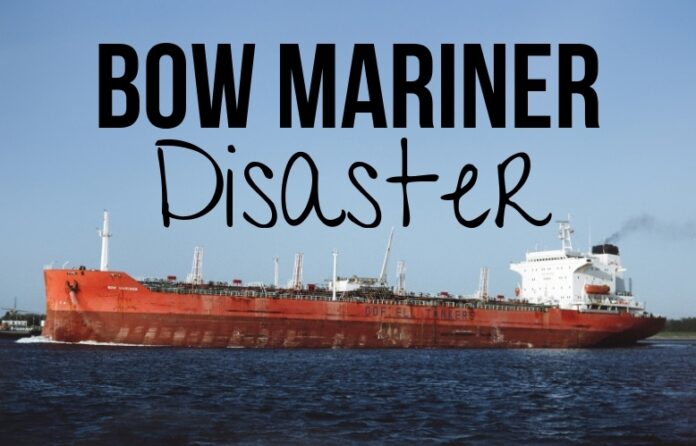 (www.MaritimeCyprus.com) On 28 February 2004, the chemical tanker Bow Mariner caught fire and exploded while the crew was engaged in cleaning residual methyl tert Butyl ether (MTBE) from cargo tank number eight starboard. The "Bow Mariner" was a 570-foot, Singapore-flagged chemical tanker built in 1982, and was managed by a Greek company, Ceres Hellenic Shipping Enterprises Ltd. The tanker was owned by Odfjell USA, headquartered in Houston.

The ship sank by the bow an hour and a half later 45 miles off the coast of Virginia. Of the 27 crew members, six made it into an inflatable life raft and were rescued. The others either died or are missing and presumed dead.

The vessel’s cargo of 3 million gallons of ethyl alcohol, along with its bunkers, were released into the sea.

The US Coast Guard investigation determined that a contributing factor to the casualty was the operator’s failure to properly implement the Safety, Quality, and Environmental Protection Management System.

The investigation stated the captain violated safety guidelines, when he ordered vapor-filled cargo tanks opened for cleaning. The investigation was unable to pinpoint what caused the explosion.

Capt. Efstratios Kavouras ordered 22 tanks to be opened, which had previously held methyl tert butyl ether (MTBE). This was contrary to normal safe practices for a tank ship and defies explanation or excuse, according to Coast Guard investigators. The report further concluded that the crew was poorly trained in safety procedures and that there was a lack of professional communication between the ship's Greek officers and Filipino crew members, and that this combination of factors contributed to the death toll.

The U.S. Coast Guard said the explosion was caused by the ignition of a fuel/air mixture, but the ignition source could not be determined. The "Bow Mariner" loaded its cargo of MTBE in Al Jubail, Saudi Arabia, on January 24, 2004, and unloaded part of it in New York on February 25, 2004. The explosion occurred when the vessel was off the Virginia coast on its way to Houston. It was transporting 3.1 million gallons of the ethyl alcohol, along with 192,904 gallons of heavy fuel oil and 48,266 gallons of diesel fuel.

The ship's tanks had not been washed or mechanically ventilated, and the concentration of vapors was above the upper explosive limit for MTBE, the report said. The captain ordered the opening of all cargo tank hatches, which permitted vapors to escape at deck level, exposing crew members to a greater risk of an explosion from an accidental spark.

The ignition produced two major explosions less than two minutes apart on February 28, 2004, which resulted in structural damage and flooding. The ship sank in one hour and 32 minutes. Three crewmen, who were recovered, died from exposure and other injuries. Eighteen others remain missing. Only six survived.

For more details, click on below image to view full investigation report: