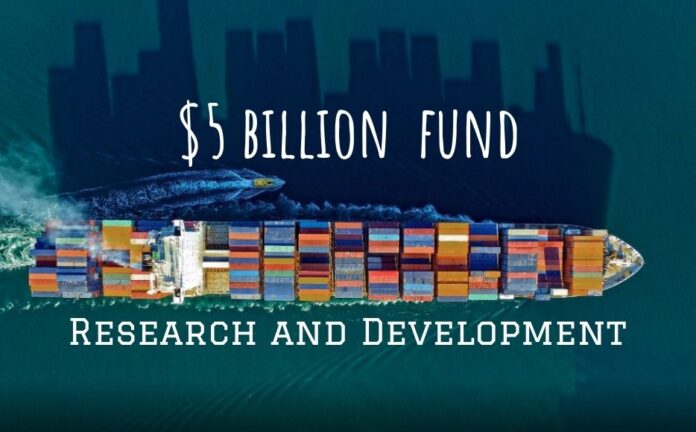 The proposal include a new non-governmental Research & Development organisation to pave the way for decarbonization of shipping. The other highlights of the proposal are the core funding from shipping companies across the world of about USD 5 billion over a 10-year period and to accelerate the development of commercially viable zero-carbon emission ships by the early 2030s.

International maritime transport carries around 90 percent of global trade and is currently responsible for approximately 2 percent of the world’s anthropogenic CO2 emissions.

The industry-wide move to accelerate R&D is necessary to ensure the ambitious CO2 reduction targets agreed to by IMO Member States in 2018 are met.

These ambitious IMO targets include an absolute cut in the sector’s total greenhouse gas emissions of at least 50 percent by 2050, regardless of trade growth, with full decarbonization shortly after. The 2050 target will require a carbon efficiency improvement of up to 90 percent, which is incompatible with a continued long-term use of fossil fuels by commercial shipping.

Meeting the IMO GHG reduction goals will require the deployment of new zero-carbon technologies and propulsion systems, such as green hydrogen and ammonia, fuel cells, batteries and synthetic fuels produced from renewable energy sources.  These do not yet exist in a form or scale that can be applied to large commercial ships, especially those engaged in transoceanic voyages and which are currently dependent on fossil fuels.

The shipping industry is proposing the establishment of an International Maritime Research and Development Board (IMRB), a non-governmental R&D organisation that would be overseen by IMO Member States.

This USD 5 billion in core funding over a 10-year period generated from the contributions is critical to accelerate the R&D effort required to decarbonize the shipping sector and to catalyze the deployment of commercially viable zero-carbon ships by the early 2030s.

Although the R&D program and its funding is an initiative of the leading international shipowners’ associations, additional stakeholders’ participation is welcomed.  A global fund can be established quickly, and the shipping industry is confident that other stakeholders will also want to contribute, potentially generating substantial additional funding for R&D.

In a proposal to the UN IMO, the industry has set out details for governance and funding of the coordinated R&D programme, which can be put in place by 2023 via amendments to the existing IMO Convention for the Prevention of Pollution from Ships (MARPOL).

The shipping industry’s proposal will be discussed by governments in London at the next meeting of the IMO Marine Environment Protection Committee in March 2020.

Speaking on the announcement, Esben Poulsson, Chairman International Chamber of Shipping said: “The coalition of industry associations behind this proposal are showing true leadership. The shipping industry must reduce its CO2 emissions to meet the ambitious challenge that the International Maritime Organization has set. Innovation is therefore vital if we are to develop the technologies that will power the 4th Propulsion Revolution. This proposal is simple, accountable and deliverable and we hope governments will support this bold move.”

Guy Platten, Secretary General International Chamber of Shipping said: “We must not leave it to others to carry the burden of addressing the climate crisis. Nor will we ask others to decide the future of maritime. We embrace our responsibility, and we ask the world’s governments to support our efforts.

“Greta Thunberg is right to say that ‘creative accounting and clever PR’ often lie behind supposed commitments to sustainability, but our plans are transparent, and our regulator has teeth. Now we ask the wider shipping community for their blessing. Change on this scale is difficult and often daunting. But in this case, it could not be more necessary. “

Simon Bennett, Deputy Secretary General International Chamber of Shipping said: “Even using conservative estimates for trade growth, a 50% total cut in CO2 by 2050 can only be achieved by improving carbon efficiency of the world fleet by around 90%.  This will only be possible if a large proportion of the fleet is using commercially viable zero-carbon fuels."

Bennett said: "In practice, if the 50% target is achieved, with a large proportion of the fleet using zero-carbon fuels by 2050, the entire world fleet would also be using these fuels very shortly after, making 100% decarbonization possible – which is the industry’s goal. $2 a tonne will generate about 5 billion dollars over a ten year period – based on total fuel consumption by the world fleet of about 250 million tonnes per year – which we believe should be sufficient to accelerate the intensive R&D effort we need to fully decarbonize our sector within the ambitious timeline agreed by IMO.”

The international shipowner associations making this proposal, which collectively represent all sectors and trades and over 90% of the world merchant fleet, are: