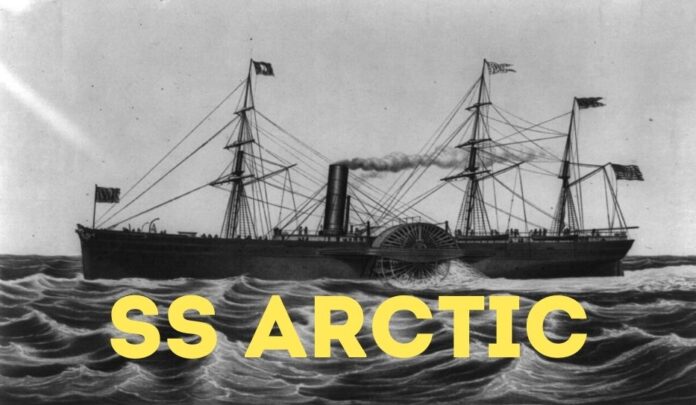 (www.MaritimeCyprus.com) On September 27, 1854, while en route to New York from Liverpool, the SS Arctic collided with SS Vesta, a much smaller vessel, 50 miles off the coast of Newfoundland. There were roughly 400 persons on board Arctic – approximately 250 passengers and 150 crew. Captain Luce's first thought was to give assistance to the stricken Vesta, which appeared in danger of sinking, but when he was told that his own ship was holed beneath the waterline, he decided to make for the nearest land. As attempts to plug the leaks failed, Arctic's hull steadily filled with sea water. The boiler fires were gradually extinguished and the engines slowed and stopped, still far from land.

In accordance with the maritime regulations then in force, Arctic carried six lifeboats, the total capacity of which was around 180. Luce ordered these launched, but a breakdown in discipline among the crew meant that most places in the boats were taken by members of the crew or by the more able-bodied passengers; one of which was the French Ambassador, the Duc de Gramont who was observed jumping from the ship into one of the last lifeboats.

The rest were left with makeshift rafts, or were unable to leave the ship and went down with her when she sank, four hours after the collision. Captain Luce, himself, unlike his crew, went down with his ship, although he survived. Meanwhile, Vesta, which appeared to have sustained mortal damage, was saved from sinking by her watertight bulkheads, and was able to gain the harbour at St. Johns, Newfoundland.[21]

Two of the six lifeboats that left Arctic safely reached the Newfoundland shore, and another was picked by a passing steamer which also rescued a few survivors from improvised rafts. Among these was Captain Luce, who had regained the surface after initially going down with the ship. He was rescued after clinging to wreckage of the paddle-wheel box for two days. The other three boats disappeared without trace.

In all, more than 300 lives were lost; the 85 survivors included 61 of the crew and 24 male passengers. All the women and children on board perished. Among those lost were the wife of Edward Collins and two of his children. Other victims included several members of the Brown family, whose bank, Brown Brothers, had helped to finance the Collins Line. Also lost was Frederick Catherwood, the English architect and painter whose name was mysteriously left off the official casualty lists for weeks until a concerted effort by his friends and colleagues resulted in a belated inclusion by the authorities and newspapers. In addition to the tragic loss of human life, a rare copy of William Shakespeare First Folio that New York lawyer and Shakespeare collector Aldon W. Griswold had purchased and shipped from Liverpool, was lost. Among the lost as well were Mahlon Day, prominent New York publisher of children's books and business publications, with his wife and daughter.

The limited telegraph communications of the time meant that news of Arctic's loss did not reach New York until two weeks after the sinking. As the full story emerged, initial public sorrow at the ship's loss quickly turned to condemnation of the perceived cowardice of the crew, and their failure of duty towards their passengers. Although some newspapers demanded an inquiry into the disaster, none was held, and nobody was called to account for their actions. Proposals that lifeboat capacity on passenger-carrying vessels should be increased, to provide a place for every person on board, were not acted on. Captain Luce, who was generally exonerated from blame by the public, retired from the sea; some of the crew survivors chose not to return to the US. The Collins Line continued its transatlantic service, until further maritime losses and insolvency led to its closure in 1858.

James Brown, president of Brown Brothers bank and the Collins Line, erected a grand monument in Green-Wood Cemetery, Brooklyn, New York, to the six members of his family lost in the Arctic disaster. This incorporates a sculpture of the ship, half-submerged by the waves. The names of those who died are inscribed on the pedestal.