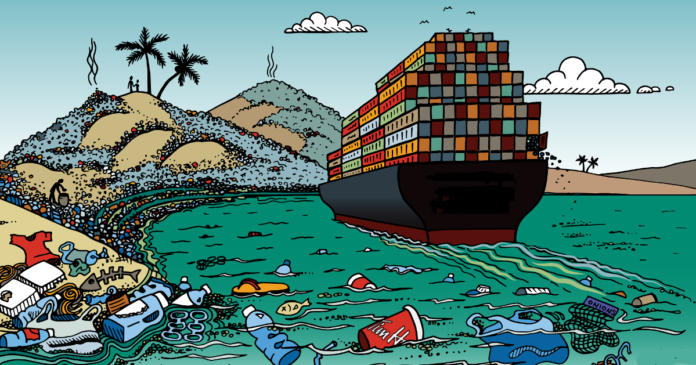 (www.MaritimeCyprus.com) The Court of Justice of the European Union, by deciding the case C-689/17, dealt with the issue of the proper classification of the “waste” produced by a breakdown on board a ship.

In case of particular waste (i.e. waste intended for disposal or for recovery), articles 4 and ff. of the Regulation provide for a complex procedure of notification and prior written authorizations (hereinafter, the “Notification Procedure”).

In any event, there are certain exemptions from the application of the Regulation for specific categories of waste, including the waste set forth in Article 1, par. 3, lett. B) of the Regulation: “waste generated on board vehicles, trains, aeroplanes and ships, until such waste is offloaded in order to be recovered or disposed of”.

Let’s see what the Court has established regarding this issue of great practical relevance, also in light of the severe sanctions connected with the violations of the Regulation, which provide for imprisonment pursuant to section 259 of the Italian Legislative Decree 2 April 2006, no. 152.

Let’s start with the facts: in 2012, during a trip from Charleston (United States) to Antwerp (Belgium), a fire occurred on board a container ship.

The ship was taken in tow by two tugs and, subsequently, led to the port of Wilhelmshaven (in the Land of Lower Saxony, Germany) and transferred to a ship-repair yard in Mangalia (Romania) for the necessary repair and proper treatment of the substances on board.

However, before the ship could resume the voyage from Germany to Romania, the Ministry of the Environment of the Land of Lower Saxony informed the shipowner that the ship itself and “the water on board used to extinguish the fire as well as the sludge and scrap metal [were] to be classified be classified as waste”.

Consequently, according to the Ministry, it was necessary to follow the Notification Procedure provided for by the Regulation, especially on account of the presence, on board the ship, of scrap metal and of fire-extinguishing water mixed with sludge and cargo residues.

Once all the operations required for complying with the decision of the German authority (in order to avoid further delays) were completed and after having been authorized to sail to Romania, the shipowner filed an appeal with the Court of the Land of Munich, seeking compensation from the aforementioned Land for the losses incurred as a result of the order to carry out the Notification Procedure.

Indeed, in the shipowner’s view, there were not the necessary conditions for imposing the Notification Procedure, as it was unlawful to classify the substances on board of the ship as waste subject to the Regulation and – consequently – to order the implementation of the Notification procedure.

More specifically, the Court of the Land of Munich held that the claim for damages made by the shipowner assumed that the Regulation was not applicable to residues caused by damage at sea of the ship and, consequently, it appeared necessary to ascertain whether the residues at issue could be included in the waste exempt from the Notification Procedure.

In those circumstances, the Court of the Land of Munich decided to stay the proceedings and to refer the following question to the Court of Justice for a preliminary ruling: “Are residues from damage to a ship at sea in the form of scrap metal and fire-extinguishing water mixed with sludge and cargo residues on board the ship “waste generated on board vehicles, trains, aeroplanes and ships” for the purposes of Article 1(3)(b) of Regulation No 1013/2006?”.

The Court of Justice specified that the residues at issue, being substances or objects that the holder intends to discard, fall within the concept of waste within the meaning of Article 2(1) of the Regulation.

As a consequence, the Court noticed that the exemption provided set forth in Article 1, par. 3, lett. b) of the Regulation should apply to all waste generated on board a ship that is not discharged by the ship, without setting out specific requirements as to the origin or the manner in which such waste was produced. What is relevant in such situations is, indeed, the place where the waste is generated (i.e. on board the ship).

More precisely, as regards a ship, the specification “until such waste is not discharged” applies –according to the Court of Justice – only insofar as the waste has not left the ship to be recovered or disposed of.

Furthermore, the Court observed that the objective of preserving and protecting the environment pursued by the Regulation is of no diriment relevance, since such principle cannot be interpreted in such a way as to include also the waste moved on board a ship in a completely accidental way within the scope of the Notification Procedure.

In fact, the unpredictability of the generation of such type of waste makes the same incompatible with any obligation of prior notification. The person in charge of the ship would not be able to know, sufficiently in advance, all the necessary information for the purposes of the Notification Procedure, thus not being able to carry out correctly and within the required time the fulfilments required by the reference legislation, aimed at ensuring the supervision and control of the waste shipped.

Therefore, the waste resulting from a vessel’s breakdown have to be treated in the same way as waste produced in a completely accidental way, as it cannot therefore be subject to the Notification Procedure.

In addition, there is a risk that the implementation of the Notification Procedure may have an impact on the environment. In this regard, as clarified by the Advocate General in his conclusions, any unjustified delay in the entry into port of waste on board a damaged ship will increase the danger of water pollution, slowing down its disposal and recovery.

So, to conclude, in the Court of Justice’s view, Article 1, par. 3, lett. b) of the Regulation must be interpreted as meaning that residues, in the form of scrap metal and of fire-extinguishing water mixed with sludge and cargo residues, such as those at issue in the main proceedings, attributable to damage occurring on board a ship at sea, must be regarded as waste generated on board ships, within the meaning of that provision, and, therefore, excluded from that regulation’s scope until it is offloaded in order to be recovered or disposed of.