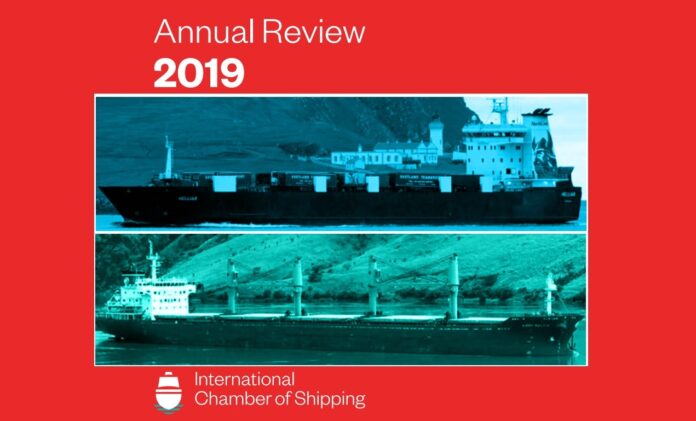 (www.MaritimeCyprus.com) The International Chamber of Shipping (ICS) is the principal global trade association for shipowners, concerned with all regulatory, operational and legal issues, as well as employment affairs. The membership of ICS comprises national shipowners’ associations representing all sectors and trades from 37 countries, covering more than 80% of the world merchant fleet.

ICS Chairman, Esben Poulsson, explained: “The immediate focus of ICS is the successful implementation of the UN IMO global sulfur cap, which will take complete effect on 1st January. ICS has produced comprehensive advice to help shipowners prepare and achieved notable success in persuading IMO to adopt appropriate guidelines for its member states.

"These initiatives should go at least some way towards reducing the risk that shipowners, through no fault of their own, could be unfairly penalised by Port State Control authorities in the event that safe and compliant low sulfur fuels are initially unavailable in every port worldwide.

"There are still many questions that will not be fully settled before 2020, not least what the cost of compliant fuels will be, but hopefully this enormous regulatory change will proceed as smoothly as possible.

“ICS is acutely aware of the urgent need for international shipping to eliminate greenhouse gas (GHG) emissions as soon as practicable, through a combination of short and longer term measures. The sector has already made impressive CO2 reductions since 2008, something for which the shipping industry is given insufficient credit. But now the industry must redouble its efforts to deliver further dramatic improvements in fuel efficiency, as demanded by governments and society at large.

"ICS has been leading the way in coming forward with constructive proposals for GHG reduction at IMO and will continue to do so throughout 2019. The transition to zero CO2 emitting fuels – which we have dubbed the ‘Fourth Propulsion Revolution’ – is the challenge of our age, and one that I know the industry will embrace.

"This will require truly massive investment in research and development, which ICS believes must be at the heart of the IMO GHG Strategy if the ambitious reduction targets that IMO Member States have set are to be met,” he concluded.

The Annual Review also explains how ICS is calling for a comprehensive review of the IMO STCW Convention governing seafarers’ training standards, and how this initiative is already gaining traction with governments.

It also examines progress on a range of other legal and policy issues at many different international fora, including high level negotiations on a new UN Law of the Sea agreement for the protection of marine bio-diversity, which could have significant consequences for the future regulation of shipping.

Among the many other issues covered are the threats of a global trade war, the spike in the number of violent pirate attacks off West Africa, and the continuing migrant problem in the Mediterranean..

Because of hardening attitudes toward immigration in Europe, Poulsson remarked that “there are increasing questions as to whether ships involved in large scale rescue operations can be confident that prompt and predictable disembarkation of rescued people will continue.”

The ICS Annual Review 2019 is being distributed via ICS’ member national shipowners’ associations. It is available free of charge and can also be downloaded here (click on below image):