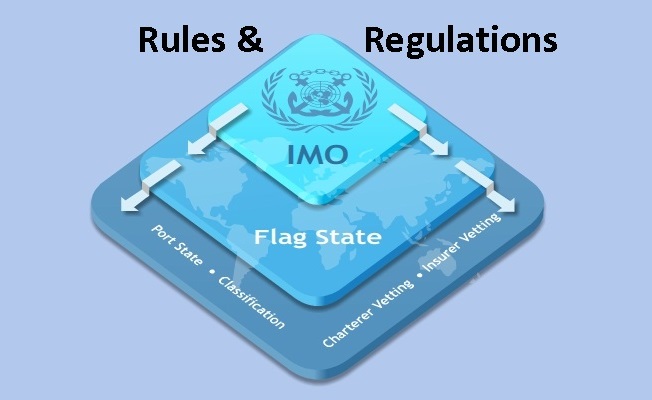 (www.MaritimeCyprus.com) The regulatory wheel keeps turning, so it is important to understand the developments when addressing compliance and making strategic business decisions. DNV GL gives owners and operators a heads-up.

2017 has been a significant year for environmental regulations. Important decisions have been made, regulations finalized, and we now have a clearer picture of the regulatory landscape than a year ago.

The Ballast Water Management (BWM) Convention entered into force on 8 September 2017. After complex discussions, with numerous twists and turns, MEPC also agreed a revised and extended implementation schedule at its 71st meeting in July this year. Briefly put, every ship in international trade will be obliged to comply sometime between 8 September 2017 and 8 September 2024. For ships of 400 gross tonnes (GT) and above the compliance date is linked to the renewal of the International Oil Pollution Prevention certificate through a set of somewhat intricate provisions, whereas ships below 400 GT must comply by 8 September 2024.

While the regulation in principle describes a ballast water discharging standard, the reality is that ships will be required to have an IMO-approved treatment system installed by the ship-specific compliance date at the latest. In practical terms this means the entire world fleet is to be compliant within 2024. There are presently more than 50 IMO-approved systems on the market.

In the US the domestic ballast water management regulations entered into force in 2013. New ships must comply upon delivery, existing ships by the first scheduled dry-docking after 1 January 2014 or 2016, depending on ballast water capacity. USCG type approval is required for the ballast water treatment systems; six have been granted over the past year. The USCG has revised its liberal extension policy of granting deferred installation dates to more than 12,300 ships in the absence of approved systems now that type approvals have been granted. DNV GL expects the new, restrictive USCG policy on extensions to tighten further. Operators should now plan their installation dates based on the compliance dates in the regulation.

At MEPC 70 the IMO members agreed that the 0.50% global sulphur cap will be implemented from 1 January 2020. The decision has provided certainty to the maritime and bunker industries, but has also provoked an intense, ongoing discussion at the MEPC on the practicalities of implementation, and ways of ensuring robust enforcement and a level playing field. Supporting measures are being discussed, but full clarity is not expected before MEPC 74 in Q2 2019. A possible carriage ban for non-compatible fuels, if agreed, is the only measure likely to have a major impact.

Ship operators will need to decide about their preferred compliance strategy, and this decision will have significant operational and financial implications. There is no one-size-fits-all solution on the table; scrubbers, LNG and “hybrid” fuels are all realistic options, but the vast majority of vessels are expected to default to MGO. Local availability issues and price volatility are expected as consequences of a dramatically changed fuel demand situation as of 1 January 2020. A significant number of non-compliance cases are likely to occur in a transitional period. Once supply and demand reach a new equilibrium, the situation should ease, but the transition will be a bumpy ride nevertheless.

Enforcement remains a critical concern, in particular on the high seas where flag states are in charge, as opposed to exclusive economic zones (EEZ) where enforcement is a port state matter. Reasonable questions are being asked about the readiness of all flag states to ensure uniform and robust enforcement, and thereby a globally level playing field. For reasons of international law the IMO cannot be expected to come up with effective enforcement measures.

NOX Tier III requirements have entered into force in the North American emission control area (ECA) for ships constructed on or after 1 January 2016. In essence anyone constructing a ship today needs to consider whether the vessel will — or might at some point — operate in the North American ECA. If so, NOX control technology will be needed for that ship.

Additionally, MEPC 71 adopted the MEPC 70 agreement to apply NOX Tier III requirements to ships operating in the North Sea and Baltic Sea ECAs. This will apply to ships constructed on or after 1 January 2021.

MEPC 71 agreed to continue its EEDI discussions through a review set to conclude in 2019. The review will consider both the reduction levels and the timing of the implementation phases. Phase three may be brought forward, and a new phase four may be agreed commencing in 2025.

The MEPC also agreed to address the EEDI issues the ro-ro industry has been facing. After it was shown that the phase two reduction levels cannot be achieved for technical reasons, the MEPC decided to ease the ro-ro requirements for phase two by 20 per cent, and to remove a key barrier for large ro-ro vessels by applying a size threshold to the requirement curve. Nevertheless, while solving the problems for phase two it is not at all clear that this fix will also take care of phase three. The issue is therefore likely to result in a renewed discussion a few years down the road.

Climate change remains the driving political force behind CO2 and energy efficiency regulations. In the EU, regulations for monitoring, reporting and verification (MRV) of CO2emissions have entered into force for all vessels above 5,000 GT sailing to or from European ports. Ships must also report cargo data and average energy efficiency. The EU will make the data publicly available on an annual basis. Monitoring plans were due to be submitted to verifiers by 31 August 2017, with 2018 being the first year of reporting. The first data sets will be published by the EU in mid-2019.

By now all practical details have been defined and published. The final piece of the puzzle, a software system for voluntary use which will facilitate the information flow between the parties involved, is under development at EMSA.

Part of the purpose behind the EU MRV regulations was to encourage the IMO to work on a similar mechanism with global rather than regional coverage. The EU regulation itself contains a provision calling for its alignment with a newly developed international system once it is available.

It is therefore of great significance that MEPC 69 did agree on a global mechanism for mandatory monitoring, reporting and verification of fuel consumption data for all ships of 5,000 GT and above. The scheme, known as the IMO Fuel Consumption Data Collection System (IMO DCS), was adopted at MEPC 70, with 2019 as its first year of implementation. MEPC 71 put the final touches on the mechanism by agreeing on verification guidelines.

Importantly, the IMO DCS differs from the EU MRV in several significant aspects, including confidentiality of data, calculation of efficiency metrics, and requirements for data verification. While these are all issues where the EU has a strong preference for the requirements of its own system, the European Commission has nevertheless initiated a formal review process aimed at potentially aligning the EU MRV with the IMO DCS. A stakeholder consultation process was run in late 2017, where stakeholders could provide their feedback to the EC.

Despite encouraging signs of a legislative proposal possibly being made public in May 2018, a word of caution is in order. In view of the political complexities of CO2-related negotiations in Brussels, it will be a challenging and likely time-consuming process for the Commission, the Parliament and the Council to come to an agreement. Therefore the industry should be prepared to accommodate two different but overlapping reporting regimes for at least some years.

The IMO is also seeing a reinvigorated discussion on long-term CO2 emission goals and the shipping industry’s contribution to emission reductions in response to the Paris global climate accord of 2015. Accordingly IMO has, in addition to establishing the DCS, also conceded that it needs to develop an IMO strategy on GHG emission reductions. The work is in progress and intended to result in an initial strategy at MEPC 72 next year, with a review in 2023. This could be of great significance to the maritime industry: not only will such a strategy have implications for future design and operational energy efficiency requirements, it may also lay the foundation for a carbon pricing scheme.

DNV GL believes that unless the IMO can build on its achievements so far and make significant progress on GHG matters, there is a real risk of other non-shipping bodies attempting to step in and regulate the shipping sector. This would not be a desirable outcome, least of all for the maritime industry itself.

By adoption of the amended SOLAS Ch.II-1, new rules are coming into effect for passenger ships contracted on or after 1 January 2020 or, in the absence of a building contract, vessels with a keel-laying date on or after 1 July 2020 or delivery on or after 1 January 2024. Major changes included new, stricter requirements regarding damage stability standards as expressed by the required subdivision index “R”, which is now only a function of the total number of persons on board. Lifeboat capacity and the length of the ship are no longer part of the formula. Furthermore, R is kept constant for up to 400 persons on board, then increases as that number rises.

The legacy version of Ch.II-1 included an option to permit certain watertight doors to remain open during navigation. This has been removed entirely. The new version also makes damage control drills mandatory for all passenger ships.

The new rules have various consequences for the design of new ships. For example, in the case of the new required subdivision index R it may be necessary to increase the ship’s freeboard or breadth, or provide improved internal watertight subdivisions compared with current designs. The stricter regulation regarding watertight doors may also affect the internal subdivision arrangement and operations on board.