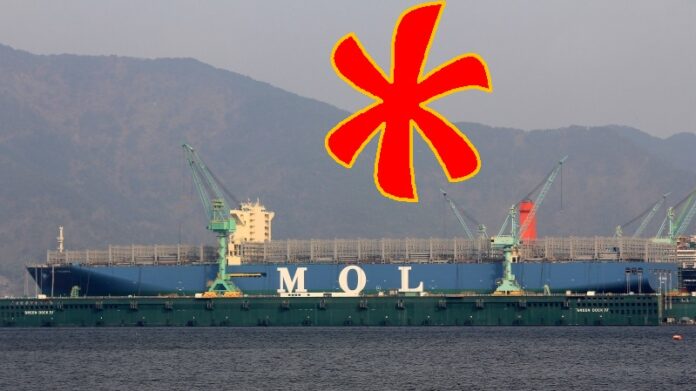 Samsung Heavy Industries has has broken the world record for the largest container ship in the world. The new vessel has ushered in an era of 20,000 TEU-class container ships (1 TEU equals one 6-meter-long container).

The world leader in shipbuilding has completed the construction of one of the four 20,150 TEU-class container ships for an order it acquired from Japanese shipping company MOL in February 2015, and held a christening ceremony at its dockyard in Geoje, South Gyeongsang Province on Wednesday. In attendance at the event were about 90 people including Samsung Heavy Industries President Park Dae-young, and MOL President Junichiro Ikeda.

The ship has been named MOL Triumph. The container ship measures 400 meters long, 58.8 meters wide and 32.8 meters high, and can transport up to 20,150 standard size containers at once.

The MOL Triumph, which is highly efficient in energy saving due to a propeller developed by the shipbuilder itself and other features, has become the largest ever among the container ships that have been built thus far, and the first ship that has opened an era of 20,000 TEU-class container ships.

“It is all the more meaningful because the ship has opened an era of 20,000 TEU-class container ships without any single accident during the 15-month construction period since the steel material cutting ceremony in late January 2016,” an SHI source said.

After the christening ceremony, the MOL Triumph will undergo the final phase of construction, and be handed over to the ship-owner on March 27 before being deployed to the European route. Samsung Heavy Industries plans to build nine additional 20,000 TEU-class container ships this year.