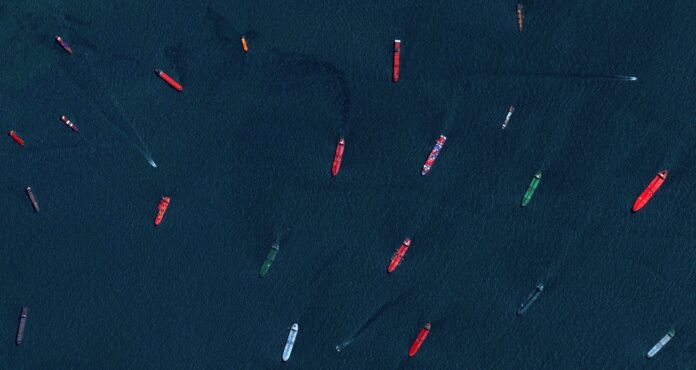 We have experienced a few big stories in the maritime and offshore industries in 2015. Here are the best picks for the headlines in year 2015.

On October 1, 2015, the 40-year-old American cargo ship El Faro went missing after sailing into the path of Hurricane Joaquin as it sailed from Florida to Puerto Rico. After days of searching, it was determined that the ship sank with the loss of all 33 crew members. The vessel was eventually found in about 15,000 feet of water off the Bahamas with the navigation bridge torn off and no sign of the VDR. The National Transportation Safety Board is set to release some new material from its investigation into the accident in early January. The tragedy is considered the worst maritime disaster in the U.S. in over 30 years.

A crack seen in the “step”, or sill, of a chamber in the new Cocoli Locks on the Pacific side of the Panama Canal. It was reported that cracks had formed in the concrete of one of the new lock chambers of the expanded Panama Canal. After several months of back and forth, it became apparent that the cracks would in fact delay the delivery (yet again!) of the $5.25 billion expansion project past April 2016.

It was January 2nd when the Gearbulk-owned MV Bulk Jupiter sank suddenly off the coast of Vietnam with the loss of all but one of its 19 crew. In the investigations that followed, it was determined that liquefaction of the ship’s bauxite cargo, a clay-like substance not typically prone to liquefying under most conditions, was to blame for bringing down the vessel. The incident sparked new warnings over the carriage of the bauxite cargoes and cargo liquefaction in general.

On January 3rd, the roll-on/roll-off car carrier Hoegh Osaka was intentionally grounded in the Solent after the vessel developed a severe list shortly after departing Southampton with some 1,400 vehicles. All crew were evacuated safely, but the vessel spent about a week slumped over on a sand bank before it refloated during a high tide and strong winds. It took about two more weeks for salvors to stabilize the vessel and tow it back to Southampton. The ship has since returned to service. 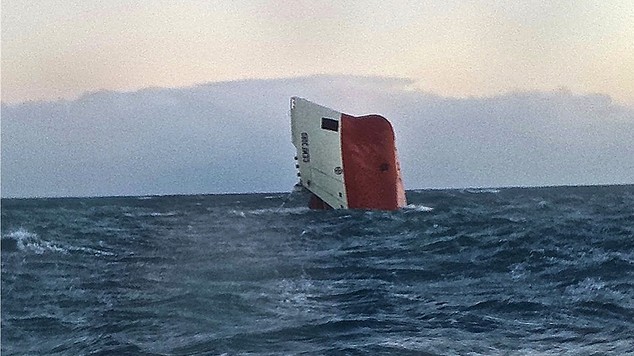 In early January, passengers aboard a ferry came across a horrific site off northern Scotland: the upturned hull of the MV Cemfjord just bobbing in the waves. As it turns out, the ship was carrying a cargo of cement from Denmark to Cheshire in western England when it mysteriously capsized and sank on January 2nd with the loss of all 8 crew members. What’s eerie is that there was no mayday call or any indication that the ship may have been in trouble, and we still don’t know exactly what happened. The wreck of the ship was found in February, but to date not a single body has been located or recovered.

One of the most talked-about ships of the last decade arrived in Rotterdam in early January after sailing from South Korea where it has been under construction for several years. The vessel, named  Pioneering Spirit, is one of the largest and most unique ships ever constructed, measuring 382 meters long by 124 meters wide and based on a concept connecting the two large tankers side-by-side. Once completed in 2016, the ship will be used for the installation and removal of large offshore oil and gas platforms in a single-lift (and business is supposed to be very good).

The chemical tanker Carla Maersk sits at anchor off Morgans Point, Texas, after being involved in a collision with the bulk carrier Conti Peridot March 9, 2015. U.S. Coast Guard Photo

On the morning of March 9, 2015, the chemical tanker Carla Maersk collided with the bulk carrier Conti Peridot in thick fog while in the Houston Ship Channel. The collision resulted in damage to the both vessels and the release of an unknown quantity of the fuel additive MTBE (methyl tertiary butyl ether) from the Carla Maersk. The Houston Ship Channel was shut for three days due to the accident.

On February 18, 2015, the Baltic Dry Index fell to its (now former) all-time low of 509 points, setting the tone for a turbulent year for the dry bulk shipping market. After recovering above 1,000 briefly during the summer months, the BDI plunged to its new all-time low of 471 points on December 16, 2015. What’s worse is that the turmoil is expected to continue well into 2016. 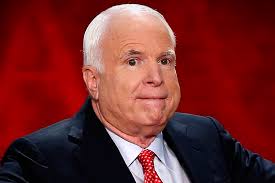 The U.S. maritime industry’s most loathed politician, Senator John McCain launched a new attack on the “antiquated” Jones Act by attempting to sneak an amendment into a Keystone XL pipeline bill that would repeal the U.S. build requirement of the Jones Act. The attack gave industry advocates a chance to show just how much support the Jones Act really has, especially in Congress, and the Keystone bill was ultimately passed without McCain’s amendment. The rhetoric again re-emerged with the sinking of the El Faro in October (but it wasn’t from McCain that time around).

The lay-up of excess ships continues around the world. Laid-up container tonnage has previously consisted mainly of smaller ships (particularly panamax vessels) displaced by larger, more economical tonnage, but most recent data has shown that post-panamax vessels of 5,000 teu and above are also facing a more uncertain employment future because of the cascading effect of the introduction of 15,000 teu-plus ultra-large container vessels (ULCVs) on the market.Idle fleet is still growing.

The world’s largest shipyards were among some of the biggest losers from the collapse in the offshore industry, with South Korea’s ‘Big Three’ shipyards- Hyundai Heavy Industries, Samsung Heavy Industries and DSME – all posting record losses in 2015. The losses can almost all be contributed to the shipyards’ bet on more complex offshore oil rigs, a strategy that now comes back to haunt them as oil prices remain low, costs rise, and new orders dry up.

More Containerships, even bigger in size

One of the world's biggest containerships, the 19,224-TEU MSC Maya, the fourth of 20 Oscar-Class vessels, has arrived at APM Terminals Gothenburg from Bremerhaven.

Whether it was the giant “megaships” hitting Asia-Europe trade routes, the always-volatile freight rates, mergers and acquisitions, or the swelling idled fleet, containerships were making news in 2015 – as they almost always do.

As they say, one man’s pain is another man’s gain… this is especially the case for the oil tanker market. Amid the worst crude market downturn in decades, tanker owners are reaping billion dollar windfalls as demand for tankers continues to flourish. In October, rates for VLCCs soared past $100,000 a day for the first time since 2008. Even better, the boom is expected to persist into 2016 as the price for crude oil remains low.

The LNG-powered Isla Bella, delivered in 2015.

Liquified natural gas continued to solidify its position as a viable alternative fuel within the maritime industry, with several planned projects finally coming to fruition over the course of the year. Notable headlines, to name just a few, included the Kvitbjørn, which in April completed the longest-ever voyage running solely on LNG; the launch (and delivery) of the world’s first LNG-powered containerships at NASSCO; the Harvey Energy, the first LNG-powered workboat in the United States; and the delivery of the MV Greenland, the world’s first LNG-powered dry cargo ship. 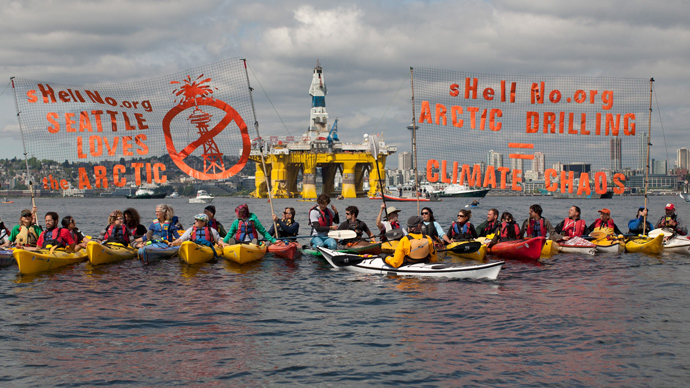 This past summer, Royal Dutch Shell decided to return to arctic for the first time since 2012 as part of its controversial search for oil offshore northern Alaska. Unfortunately for Shell, its effort was met by additional complications in the form of Greenpeace activists, an unexpected incident involving the Fennica icebreaker, and eventually a lack of recoverable oil. The company decided in September to abandon its Alaskan Arctic exploration plans altogether after spending about $7 billion.

The never-ending saga of the Costa Concordia continued in 2015. The ship spent the year being dismantled in Genoa, Italy, while its disgraced captain, Francesco Schettino, was found guilty and sentenced to 16 years in prison over the 2012 disaster. He also released a 600-page book, which apparently provides his version of the disaster along with every little detail about his life. An aerial photo taken through a glass window of a Philippine military plane shows the alleged on-going land reclamation by China on mischief reef in the Spratly Islands in the South China Sea, west of Palawan, Philippines, in this May 11, 2015 file photo. REUTERS/Ritchie B. Tongo/Pool

Tensions were running at an all-time high in the South China Sea in 2015 as China accelerated its land reclamation in the resource-rich region, turning reefs into artificial islands for airfields and other facilities in which China claims will help maritime search and rescue, navigational security and disaster relief. Unfortunately, nobody else is buying it. Royal Caribbean’s Quantum of the Seas arrives in Hong Kong in June 2015, on its way to its new homeport in Shanghai, China. Photo: Ian Edwards

The cruise industry has been talking about Asia’s potential for years now, but 2015 was the year that it really took off. Pretty much everyone who is anyone announced real plans this year to send more ships to China. The debate over emissions from ships was reignited in 2015 in the lead up to the United Nations Climate Change Conference (COP21) held in Paris in early December. While shipping was not explicitly referenced in the final text of the historic Paris Agreement, seeking to limit global manmade greenhouse gas emissions and minimize the impact of climate change, it did spark new calls for the UN’s International Maritime Organization to continue its work to further reduce CO2 emissions from ships.