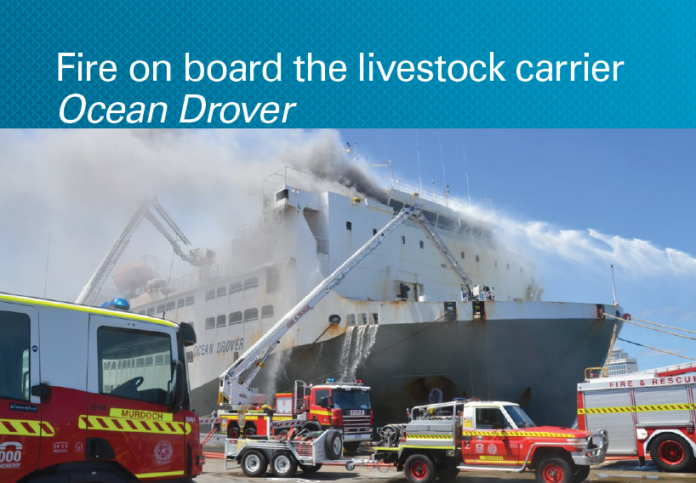 The Australian Transport Safety Bureau (ATSB) issued the report of its investigation of a fire on board the livestock carrier Ocean Drover at berth in Fremantle on 9 October 2014.

What happened
On the morning of 9 October 2014, a fire started in Ocean Drover’s crew accommodation while the livestock carrier was berthed in Fremantle, Western Australia. The fire quickly spread across both accommodation decks. The ship’s crew and shore emergency response teams responded and fire-fighting efforts continued for the rest of the day.

By the time the fire was extinguished late that evening, the ship’s accommodation areas and its navigation bridge had been extensively damaged. Four of the ship’s crew sustained injuries that required medical treatment.

What the ATSB found
The ATSB found that the fire started in a centrally located forward cabin on Ocean Drover’s upper deck. The intensity of the fire and the severity of the damage made it impossible to identify an exact point of origin or source of the fire.
The ATSB investigation found that the cabin door was left open after the fire was discovered allowing smoke and flame to spread beyond the cabin. Further, the bridge deck stairwell fire door was hooked open, which allowed the fire to rapidly spread and engulf both the upper and bridge decks.

The investigation also identified that the ship’s crew did not complete a muster and accurate head count when responding to the fire. While cigarette smoking was not identified as a contributing factor, it was found that the smoking policy and associated risk controls on board were not effectively managed.