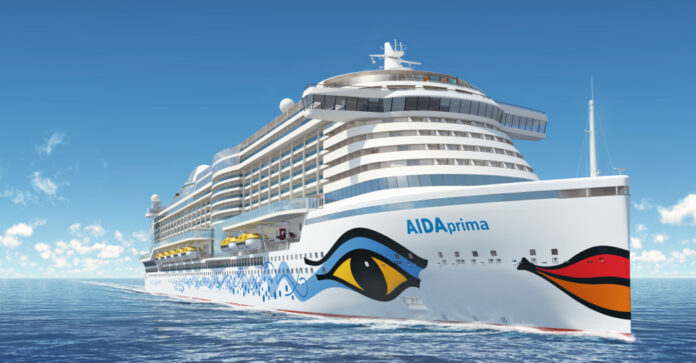 On March 14, 2016, AIDA Cruises took delivery of its first newbuild of a new ship generation from Mitsubishi Heavy Industries Ltd. (MHI) in Nagasaki during a formal ceremony.

In the presence of Michael Thamm, CEO of the Costa Group, and Felix Eichhorn, President AIDA Cruises, AIDAprima was handed over to the cruise line by Shunichi Miyanaga, President and CEO, and Yoichi Kujirai, President and CEO, Commercial Aviation & Transportation Systems MHI. The ship has left Nagasaki today towards Hamburg. AIDAprima, the 11th ship in the AIDA fleet, will be christened by Emma Schweiger on May 7, 2016, in front of an audience of millions as the climax of the 827th HAMBURG PORT ANNIVERSARY.

“AIDAprima is the first ship of an entirely new AIDA product family. With creativity and great innovativeness, our team has managed to implement our high standards in terms of product quality and environmental friendliness in an exemplary and impressive way. We are extremely pleased with the successful design of the ship, and look forward to welcoming guests aboard her, who are going to be equally impressed," said Michael Thamm, CEO Costa Group, on the occasion of the ship's handover.

Felix Eichhorn, President AIDA Cruises: "20 years ago, AIDA launched its concept of modern cruising. With our new flagship and the three newbuilds to follow, the company will continue to provide important growth impulses for the German cruise market. We are once again charting new territory by being the first German cruise line to offer cruises starting from Germany the whole year round. I am convinced that we will reach new guest groups with our unique variety of offerings aboard AIDAprima."

Shunichi Miyanaga, President and CEO MHI, commented: "We are proud to deliver AIDAprima, the first of a new generation of energy-efficient cruise ships superbly equipped to provide a fantastic cruising experience for passengers.”  Built to accommodate 3300 guests and over 900 crew members, AIDAprima will be christened on May 7 on the 827th Hamburg Port Anniversary. The ship is equipped with Mitsubishi Air Lubrication System which enhances fuel efficiency, as well as other such as a pod propulsion system, liquefied natural gas (LNG) fuel supply system, the latest gas emissions treatment system, and a new air-conditioning system.

From April 30, 2016, Hamburg will be the home port for seven-day round trips to Western Europe's most beautiful metropolises such as London, Paris, Brussels, and Amsterdam.

AIDA Cruises is one of the fastest growing and economically successful tourism companies in German and currently employs around 8,000 personnel from 40 countries, with 7,000 of these working on board and the remaining 1,000 at the company’s main offices in Rostock and Hamburg. With 11 cruise ships at present, AlDA operates and markets one of the most modern and environmentally friendly fleets in the world. The vessels are operated according to the highest international quality, environmental and safety standards. By 2020, the AIDA fleet will grow to 14 ships.