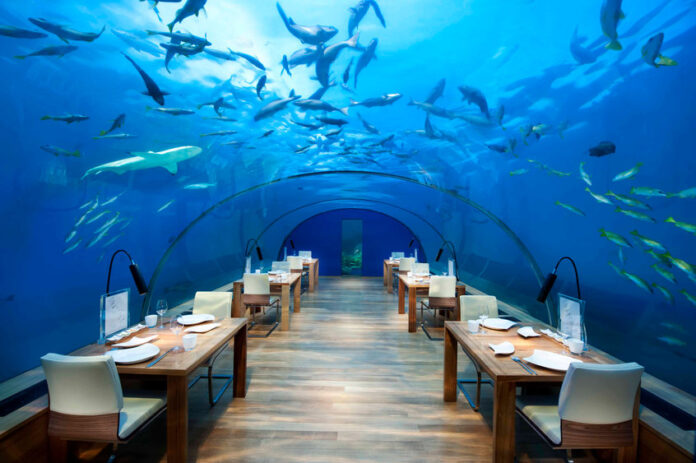 The world’s biggest underwater restaurant has been fabricated in New Zealand and is now on its way to the Maldives, where it will be the centerpiece of a tourist resort that is presently under construction at the Lhaviyani atoll.

The prefabricated acrylic structure is being shipped in one piece, including its 13-m-high stairwell. After a journey of 11,100km it will be installed in the resort of Hurawalhi, where it will offer guests the chance to dine surrounded by marine life, including replanted corals.

It will take its place among other underwater restaurants in the Maldives, including the Ithaa, pictured above, run by Conrad Hotels.

The restaurant can seat 24 diners, who will get to their tables by walking to a hut above the water, then descending a spiral staircase to the main chamber, which is almost entirely formed of clear acrylic attached to a steel base.

Food will be prepared on land then conveyed to them by dumb waiter. Later, the restaurant will also be available for weddings and as a honeymoon suite.

The 410-tonne structure was fabricated by Fitzroy Engineering at its Waiwhakaiho plant. The company usually supplies the oil and gas industry, and so has experience in creating pressurised subsea structures.

The job of transporting the 18m-by-5m structure was handled by the GAC Group, a Dubai-based shipping and logistics specialist. According to GAC, the process took 12 months to plan, and relied on CAD-assisted lifting and lashing calculations to prepare the structure for its voyage.

Then it was lifted onto a cargo ship and is now en route to the Indian Ocean, which it will reach in the first week of March. Once there, the unit will be craned onto 8m and 14m piles, ready for the resort’s opening in August.

A video of the restaurant leaving New Zealand can be downloaded here.