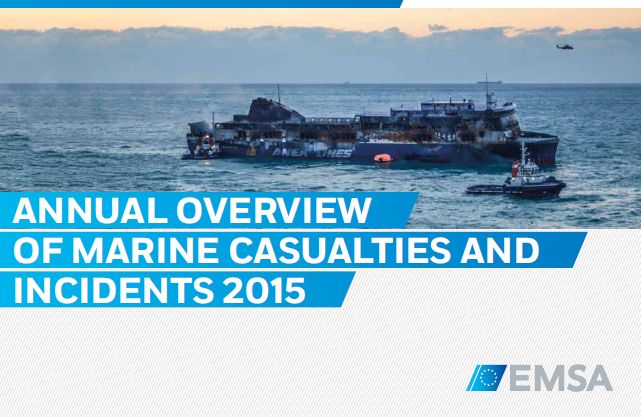 A total of 9180 occurrences have been reported to European Marine Casualty Information Platform (EMCIP) over its first four years in operation, 2011-2014, and have been used to produce this publication. Complete report is available at the bottom of this article.

EU Member States have continued to increase the reporting of casualties and incidents in EMCIP. Comparison of the notifications in EMCIP against commercial sources that record accidents, suggested that approximately 3 500 occurrences (ranging from marine incidents at the lower end of the scale through to very serious accidents) could be expected to be notified annually.

However, only some 3025 occurrences were in fact reported to EMCIP for the year 2014. It should be borne in mind that there can be a time-lag between the incident and it being reported in EMCIP, and a number of incidents that took place in 2014 were still to be notified when the data for the Annual Overview was extracted. The implementation of the reporting of marine casualties and incidents into EMCIP has been a gradual process. While the data can be used to shed light on certain aspects of maritime safety, it should not be used as an indication of the full
picture.

Over the period 2011-2014 under consideration, more than 390 persons lost their lives and 3 250 were injured. Around two thirds of the total occurrences directly involved damage to a ship while one third was about accidents to persons on board.

While the majority of ships that sank were fishing vessels, cargo ships represented 44% of all ships involved. 67% of accidents were related to human erroneous actions. Although EMCIP contains a substantial body of data, the population of the database has been gradual and progressive and it is too soon for this publication to provide a full picture or indicate trends over recent years. However, if used with
caution, the data provides a picture of some aspects of maritime safety within the scope of the Directive.