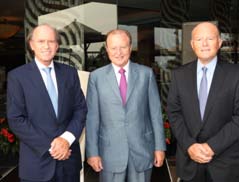 Tsavliris Salvage hosted a successful event during Maritime Cyprus 2015 on the evening of Friday 11 September. The event was held at the impressive Four Seasons Hotel in Limassol and attracted over 200 people from all sectors of the shipping industry. Guests included the Cypriot Minister of Transport, Communications and Works, representatives from the Department of Merchant Shipping of Cyprus, the Cyprus Shipping Chamber, the Cyprus Union of Shipowners, CYMEPA as well as representatives from shipping and management companies, P&I Clubs and underwriters.

George Tsavliris, principal of Tsavliris Salvage and president of CYMEPA welcomed everyone noting that the Tsavliris group is no stranger to Cyprus. The group’s founder, Alexander G. Tsavliris, had a presence in Cyprus from the early 1960s, when he first registered ships with the Cyprus Registry. By 1967 he had a dozen cargo vessels registered under the Cyprus flag. Since then the group has had a continued presence in Cyprus in the fields of salvage & towage and environmental protection. He announced that Tsavliris is actively focusing in offshore oil & gas within the Cypriot continental shelf.

The Group is very much a part of the Cyprus shipping community as it is also a part of Tsavliris. Today, four of the entities within the Tsavliris group are registered in Cyprus maintaining a strong presence on the island. In addition, the Tsavliris Cultural Foundation has been formed in Cyprus, promoting cultural activities.Testament to the importance of Cyprus to Tsavliris Salvage was the fact that all three principals and their families were at the event –Nicolas, George and Andreas Tsavliris; as well as some from the new generation Claire and Alexandros Tsavliris. Many of the Tsavliris senior personnel also attended, including the Operations Manager, Captain George Polychroniou; CFO Stavros Perdikaris; in-house lawyer Maria Adamopoulos; head of marketing and public relations Lia Panagopoulos, and many more. Finally, the important milestones for the group were highlighted, celebrating 100 years from the birth of the group’s founding father, Alexander G. Tsavliris; 75 years from the commencement of the first Tsavliris shipping company and 50 years from the foundation of Tsavliris Salvage in 1964.

Tsavlirisis one of the most active emergency response contractors for maritime casualties worldwide, having handled over 2.500 casualties. With tugs on permanent stations at strategic locations worldwide, the Group’s international activities embrace every service relating to marine salvage & towage, extending to complex wreck removals and protecting the marine environment from pollution. Tsavliris is committed to maintaining a modern global network providing rapid assistance to shipping.