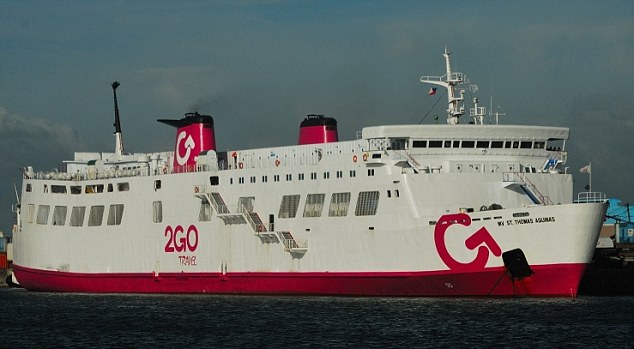 MV St. Thomas Aquinas was a Philippine-registered passenger ferry operated by 2GO Travel. On 16 August 2013, the vessel collided with a cargo ship named MV Sulpicio Express Siete of Philippine Span Asia Carrier Corporation (formerly Sulpicio Lines) causing it to sink. As of 21 August 2013, there were 61 dead and 59 missing with 750 rescued as a result of the accident. The ferry, named after the Catholic Saint Thomas Aquinas, was a 455-foot (139 m) long roll-on/roll-off ferry capable of transporting both passengers and their vehicles. It measured 11,000 tons and was commissioned in 1973. It was operated by 2Go at the time of its sinking.

On Friday, 16 August 2013, St. Thomas Aquinas departed from Nasipit, Agusan del Norte, on the southern Philippine island of Mindanao. At approximately 21:00 PHT (13:00 UTC), it was heading into the port atCebu City via the Cebu Strait when it collided with MV Sulpicio Express Siete (IMO 7724344), a cargo ship owned by the Philippine Span Asia Carrier Corporation that was leaving port, approximately 1.2 miles (1.9 km) from Talisay, Cebu. St. Thomas Aquinas immediately began to take on water, prompting the captain to order the ship abandoned. The crew hurriedly handed out life jackets as hundreds of passengers jumped overboard. Within 30 minutes, the ship sank.[7]

At the time of the collision, St. Thomas Aquinas was carrying 715 passengers (58 were infants) and 116 crew members. Many passengers were asleep at the time or otherwise had trouble finding their way to the deck in the dark A spokesperson for 2Go said there was a high probability that some passengers were in the area of impact and were trapped by the damage. The Sulpicio Express Siete, which did not sink, has 36 crew members on board. Sulpicio Express Siete was severely damaged at the bow in the accident.

Local fishermen saw several flares–a sign of distress–being launched from St. Thomas Aquinas and helped with initial rescue efforts. "We just picked up the survivors and left the dead in the water," said a rescuer. "I heard screams and crying." The National Disaster Risk Reduction and Management Council (NDRRMC) is conducting the formal rescue efforts. Rescued passengers were taken to local hotels.

On Saturday, 17 August 2013, divers began the process of recovering bodies from the sunken ship, but suspended operations later in the day due to safety concerns. 31 people were confirmed dead with 172 others missing as of midday, when rescue operations were suspended due to rough seas. By 18 August, there were 35 confirmed deaths and 85 others missing as a result of the accident. On 19 August, the Coast Guard confirmed 55 dead and 65 missing with 750 rescued. Rescue and recovery efforts have been hampered by bad weather.

The death toll is "almost certain" to rise, according to the Philippine Coast Guard. Many of the survivors were sickened after swallowing seawater and oil believed to have leaked from St. Thomas Aquinas.

A cause for the accident has not yet been determined, and an official investigation will be launched after rescue efforts are ended. In a statement, 2Go said St. Thomas Aquinas "was reportedly hit" by Sulpicio Line's cargo vessel, but at the same time refused to directly blame the cargo vessel. 2Go also said the Port of Cebu is unusually narrow and that special traffic control measures were in use to try to avoid accidents at the port.

Maritime accidents in the Philippines are common due to a combination of bad weather, poor maintenance, and lax enforcement of safety regulations. The Philippine Span Asia Carrier Corporation (operator of Sulpicio Lines) has been involved in five maritime disasters, most notably the 1987 sinking of the ferry Doña Paz that resulted in an estimated 4,000+ deaths.

A Special Board of Marine Inquiry was opened on 23 August in Cebu City, led by Commodore Gilbert Rueras of the Philippine Coast Guard. The captains of the MV St Thomas Aquinas and the Sulpicio Express Siete testified, as did Captain Galipher Ian Faller, captain of a Trans-Asia Shipping Lines cargo ship in the area, the Trans Asia Nine. Captain Galipher of the Trans Asia Nine testified that the Sulpicio Line Siete was in the inbound lane instead of the outbound lane.