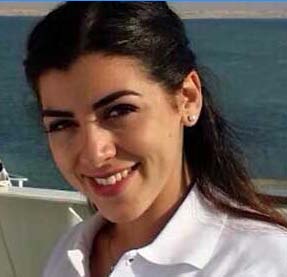 “Even though I have been dreaming of taking part in the [New Suez Canal] opening ceremony, I never thought the dream would come true,” says Slehdar. “I was overjoyed when I learned that I would be on deck of ‘Aida 4’ as a second naval officer, making me the youngest and first Egyptian and Arab shipmaster to take part in a celebration that the whole world will be watching.” Marwa el-Slehdar, 24, is a graduate of the 73rd class of the Arab Academy of Science, Technology and Maritime Transport (AAST) in the coastal city Alexandria, and is regarded the first Egyptian woman to study marine navigation at AAST.

Slehdary shared in an interview on the TV show, Masr Elnahrda (Egypt Today) that although the department only saw male applicants, there was no rule against the application of girls. However, after a female student from Djibouti was admitted into the program on a scholarship, Slehdar took the daring initiative, and approached the academy board, requesting to be transferred to the highly demanding department.Nevertheless, her family’s support was a great motive for her not only to join the male-dominated field, but to excel at it as well. Three years after her graduation, Slehdar has found a new family away from home on deck of the ships she serves on. “When I was informed of being accepted as part of the Aida 4 crew, I was both happy and afraid. But when I stepped on the ship, Captain Abdelhamid el-Qady, master of Aida 4, was very welcoming which washed away my fear. I soon blended in with the crew, and felt like they were my family.” “When we sailed towards the new Suez Canal, I knew it was a grand project, but I hadn’t realized until [I saw it for myself] that we are before a unique event,” Slehdar added, expressing how proud she is of Egyptians who succeeded at defying many challenges in a single year to bring forth a grand project as such.

On July 25, less than two weeks prior to the official inauguration of the new Suez Canal, the new waterway saw the passage of three container ships as a test-run.Under the patronage of the Egyptian army and president Abdel Fattah al-Sisi, the new waterway, an $US 8 billion mega-project that has been under construction since August 2014, is scheduled to be formally opened on August 6.