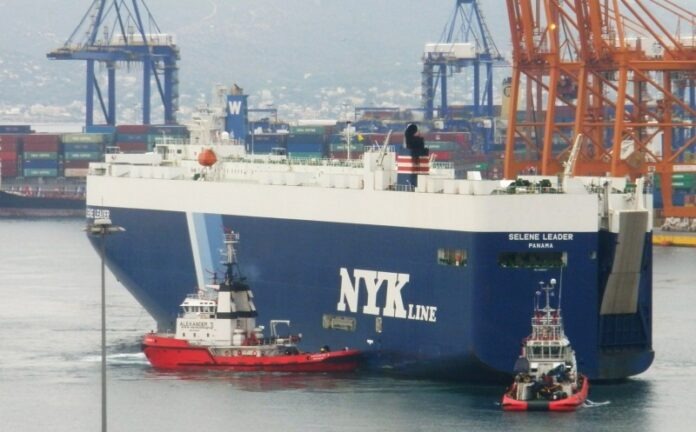 A company controlled by NYK has admitted covering up the deliberate discharge of oil and has been ordered to $1.8m by a US court.

The US Department of Justice (DOJ) issued a news release stating that the Hachiuma Steamship Company pleaded guilty in federal court to violating the Act to Prevent Pollution from Ships (APPS) by failing to maintain an accurate oil record book (ORB) concerning the illegal disposal of oil residue and bilge water overboard from the vehicle carrier M/V Selene Leader.

It allegedly failed to maintain an accurate oil record book concerning the illegal disposal of oil residue and bilge water from the car carrier Selene Leader (built 2010). In addition to the fine, chief US District Judge Catherine Blake ordered Hachiuma Steamship to be placed on probation for three years during which it is to develop an environmental compliance program.

“The US Coast Guard is trying to send a message to the maritime industry that environmental compliance is not optional and that deliberate violators will be apprehended,” said US Coast Guard (USCG) captain Kevin Kiefer, captain of the Port of Baltimore.

“The sentence fits the crime because it includes a requirement that these defendants develop and implement a comprehensive environmental compliance program that will be ensured by outside auditors. Companies that get caught can expect a much closer look.”

According to the plea agreement, in January 2014, engine room crew members of the vessel under the supervision of the chief engineer Noly Torato Vidad and first engineer Ireneo Tomo Tuale transferred oily wastes between oil tanks on board the ship using rubber hoses and then illegally bypassed pollution control equipment and discharged the oily wastes overboard into the ocean. The Selene Leader arrived in Baltimore on 29 January 2014 with an oil record book that failed to include entries reflecting the discharge of oily water and oily waste directly into the ocean.

The USCG boarded the ship for inspection the next day and found that Vidad had tried to hide the illegal discharges of oil by falsifying the oil record book, destroying documents, lying to USCG investigators, and instructing subordinate crew members to lie to the USCG.

Some $250,000 of the fine was awarded to a whistleblower on board the M/V Selene Leader who alerted the USCG about the illegal activities on board the vessel, provided a video showing the illegal transfers of oily wastes and assisted in the USCG’s investigation.

Vidad, age 47, and Tuale, age 63, both of the Philippines, previously pleaded guilty to their participation in the scheme and are due to be sentenced in federal court in Baltimore on 20 February and 3 March 2015, respectively.

The company was sentenced to pay $1.8 million and to serve three years on probation, during which time it must develop and implement an environmental compliance program.