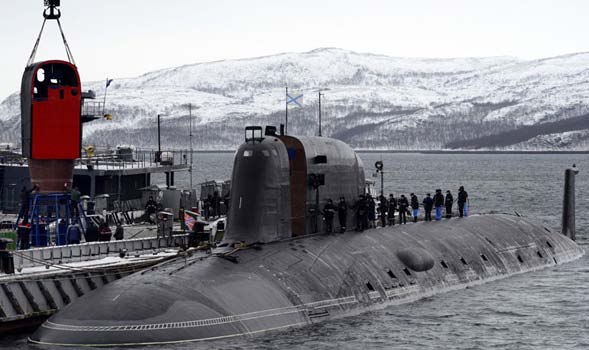 With painful memories of the Kursk disaster in mind, the Russian Navy has created an emergency chamber on its latest Severodvinsk submarine. Last weekend, the crew tested it in Zapadnaya Litsa. 885 submarine with the escape module removed (seen hanging in the crane with red colour).

“None of us can get out,” were the last words Captain Lieutenant Dmitri Kolesnikov wrote on the slip of paper the rescue divers found in his pocket. Kolesnikov was one of the 23 submariners that survived the initial explosion and fire onboard the Kursk when it sank in the Barents Sea on Aug. 12, 2000.“

All personnel from compartment six, seven and eight moved to the ninth,” Dmitri Kolesnikov explained in the same note.It is unknown for how long time the crew-members was alive. Maybe hours, maybe days. When the Norwegian rescue divers nine days later opened the outer hatch over the ninth compartment in the rear part of the submarine, they found the airlock all flooded with water.

The entire crew of 118 people lost their lives on the bottom of the Barents Sea. With the Severodvinsk submarine, the Russian Navy is showing that it takes the lessons learned from the Kursk disaster seriously. The submarine has an built-in rescue chamber where the crew can gather in case of emergency sinking.

The chamber, located as a part of the tower, can be shut out like a catapult and will surface within seconds. Last weekend, the unique catapult chamber was tested with crew members inside for the first time. Russia’s Ministry of Defense posted photos from the test that took place in the Litsa Fjord, just outside where Severodvinsk has its home base. The Litsa Fjord houses the Northern Fleet’s westernmost naval base, only 37 miles from Russia’s border to Norway in the north. The Severodvinsk dove to a depth of about 130 feet before the officers in the command room stabilized the vessel to simulate a fixed position on the seabed.

When the alarm was triggered to abandon ship, a test team of five crew members entered the rescue chamber, and it was released from the hull. A few seconds later, the chamber pops up on the surface like a cork and a red signal smoke is released. To make the test fully realistic, in addition to the five men the chamber buoyance is filled with tons of water to simulate the weight of the submarine’s entire crew.

The Severodvisk has a crew of 90. At the surface, the crew members were picked up by rescuers in a fast-speed zodiac and the capsule was lifted onboard another vessel and brought to the pier where it again will be attached to the tower of the submarine.

All of Russia’s new nuclear-powered submarines under construction are equipped with similar popup rescue chambers, according to the press service of the Western Military Districts. This story is posted on Alaska Dispatch News as part of Eye on the Arctic, a collaborative partnership between public and private circumpolar media organizations.