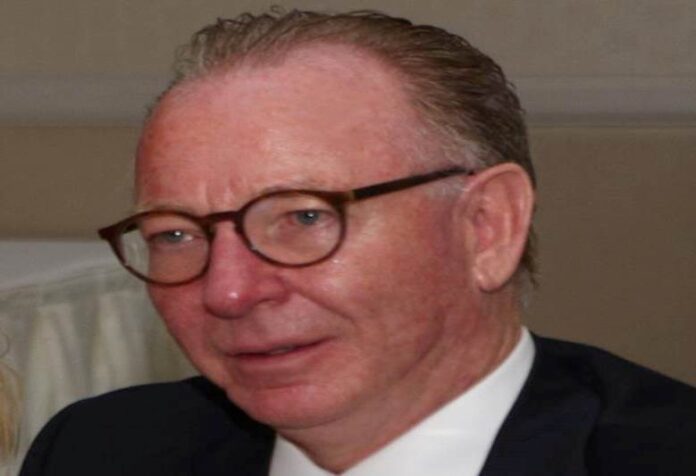 Österreichischer Lloyd Seereederei (Cyprus) Ltd’s slogan, “Steaming Ahead”, conjures up images of a mighty vessel slicing through the azure waters of the ocean. The phrase also brings to mind the confidence and determination with which the shipping company has developed its operations over the course of its rich 178-year history. And it may also refer to the firm’s relocation in 2001 to Cyprus, where it has become a key component of the island’s attractive maritime sector, both facilitating and advocating for its development.

In an exclusive interview with Gold, Capt. Eberhard Koch, Chairman, CEO and Managing Partner of Österreichischer Lloyd Seereederei (Cyprus) Ltd, discuss all the ways in which ÖL has been – and still is – steaming ahead.

ÖL has undergone a series of transformations since its establishment. Tell us about its history.

Österreichischer Lloyd was founded in 1836 and was one of the biggest shipping companies in the world by the turn of the 20th century. With the demise of the Austro-Hungarian Empire in 1918, ÖL ceased to exist and was subsequently re-born shortly after the Second World War in 1951 as a shipowning company in Vienna, Austria.

Then, in 1976, the company joined forces with Krohn Shipping Group and became, in 1991, a ship management subsidiary both for in-house as well as third party vessels. Having joined in 1984 as Managing Director, in 2001 I had the opportunity to move to Cyprus, where we had partially taken our operations. After careful consideration, we relocated our full operations to the island in the same year, to where our offices are currently located, close to the Port. In July 2008, we decided that we no longer wished to be considered a Third-Party Ship Management firm and subsequently underwent a strong and steady development to concentrate purely on ship ownership.

Since then, as shipping has became more competitive, ÖL has introduced its proven expertise and a comprehensive range of services to the maritime sector. ÖL proudly flies the Cyprus flag and exclusively accommodates the excellent skills of the existing Med Crew Ltd seafarer pool onboard.

What inspired the relocation of the company’s headquarters to Cyprus 13 years ago?

Cyprus is very attractive to companies of the maritime sector. Its strategic location, excellent tonnage tax system and relevant treaties with other shipping hubs all contributed to the decision; I personally believe that the Cyprus flag is one of the best, most advantageous flags in Europe.

The island lies at the crossroads of three continents – Europe, Asia and Africa – it has an excellent, skilled workforce and, in terms of legal and accounting services, Cyprus again ticks all the boxes with its professional service offering, as well as it banking operations – yes, I can still say this despite last year’s developments in the financial sector. Apart from the favourable business environment, the decision to relocate the company must also have taken many personal factors into consideration. From this perspective, what drew you to live in Cyprus?

Moving to Cyprus had been my intention for quite a long time and I still feel that I should have done it earlier. Having previously visited the country several times on business, I had seen its healthy, safe, welcoming atmosphere for myself. It was such a stark contrast to my native Austria in so many ways and I couldn't help but lament my departure whenever I was to leave the island!

I love the sea and I greatly enjoy taking my boat out. Back in Austria, whenever I managed to escape on a Friday afternoon to the Baltic where my boat was located, we either faced rain, thunderstorms, or strong winds – an unpleasant experience! Subsequently my wish was to move to the South. Interestingly, Österreichischer Lloyd was originally founded in the Mediterranean city of Trieste and so, in some ways, it has come full circle by returning to another Mediterranean city.

I am extremely happy to have been here for the past 14 years and I can safely say that nobody will persuade me to go back to Germany!

Would you encourage others in the international maritime sector to follow your example and establish operations on the island?
Cyprus encompasses a marriage of business potential and quality family life. I am certainly promoting this; whenever I talk to colleagues, associates, clients and the like, I tell them that this is one of the safest, healthiest countries in Europe. Though the banking sector could be better managed and structured, there is the potential to establish ship finance here and to promote the maritime cluster much more than we already do.

We have excellent flight connections, excellent schools, hospitals – everything is here. The climate is fantastic, the food is exquisite and the island is peaceful. These factors are greatly relevant to the business community. At ÖL, for example, we are doing the same work as a shipping company in Hamburg but believe me when I tell you that we are doing it in a much more relaxed, enjoyable way, due to this optimal lifestyle.

Indeed, despite the island’s recently altered economic environment, many advantageous factors remain. Can the same be said about its business incentives? Are these still as applicable to ÖL today as they were when you first began operations on the island?

Absolutely! We still believe that Cyprus is one of the few jurisdictions that offer the “full package”.

It remains one of the most advantageous business centres in the region in the wake of the financial crisis, with the added benefit of the availability of attractive programmes such as the Permanent Residence Permit and naturalisation via investment. Though Cyprus may very well be considered a small country to some, in my opinion it is a solid jurisdiction and should be given the recognition it so greatly deserves in this respect.

In order for its great qualities to be known, however, constructive efforts for the promotion of the island – and its shipping sector – must be undertaken.

To promote shipping, we urgently need a Permanent Director for the Department of Merchant Shipping, as well as an Under-Secretary for Shipping.

These positions must be fulfilled by high calibre, local professionals from the maritime sector, of which there are several potential contenders who are more than adequately qualified to undertake the responsibilities corresponding to these positions.

This would – I’m certain – result in a significant increase of the shipping sector’s contribution to the country’s economy.

Isn’t this something that has already been promised by the Government?

All three candidates in the February 2013 presidential elections promised to appoint an Under-Secretary for Shipping, who would deal directly with the President to resolve imminent matters and work for the fulfilment of shipping potential in Cyprus. Nicos Anastasiades has been President of the Republic for over a year now and nothing has happened; this is very disappointing.

The shipping sector collectively contributes 7% of the island’s GDP. In my opinion, we could contribute much, much more – at least double. We have a fantastically responsible Department of Merchant Shipping, lawyers, bankers and excellently educated staff on the island – but we desperately need to promote the industry.

To be fair, the incumbent President has had to deal with so many pressing matters following his election.

Yes, but although there is a feeling that the Government is paying attention to more urgent matters – which I am happy about, as, I’m sure, is the Troika – we should not ignore the development of something that creates earnings on a daily basis.

I must emphasize that the Department of Merchant Shipping is a cash-cow – it is simply a profit centre – despite the fact that it doesn't have a permanent director! Just imagine how much further it could develop if measures were set in place specifically targeting its growth.

Other jurisdictions have certainly benefited from such permanent roles in key maritime institutions. Is there a country whose shipping sector you particularly admire and believe Cyprus would benefit from emulating?

Singapore certainly comes to mind. Administered by the Maritime and Port Authority (MPA) of Singapore, the country actually now ranks among the top ten largest registries in the world, with more than 3,000 registered vessels, totalling 43.7 million gross tons, and is considered one of the preferred choices of flag by many international ship owners.

Singapore-registered vessels not only enjoy tax advantages and financial incentives but they also benefit from a high-quality ship registry. Singapore appears to have an efficient infrastructure and a business-friendly environment which continues to attract ship owners worldwide to register. Welcome in all of the world’s ports, this mark of quality translates into business advantages over more traditional-based operators. With no restrictions on trading areas of Singapore-flagged ships, some clients prefer to deal with a Singapore-incorporated maritime operator.

Have such incentives ever tempted you to move from Cyprus and adopt the Singapore flag?
No, despite all the advantages of Singapore, I am not considering adopting its flag, as long as Cyprus’ tonnage tax system (TTS) is safeguarded. I implore the relevant bodies not to alter the TTS, as it is not only a factor of great significance for Österreichischer Lloyd but arguably the prime attraction of Cyprus’ maritime industry.

Provided that the tonnage tax remains consistent, I won’t be planning to move from Cyprus.