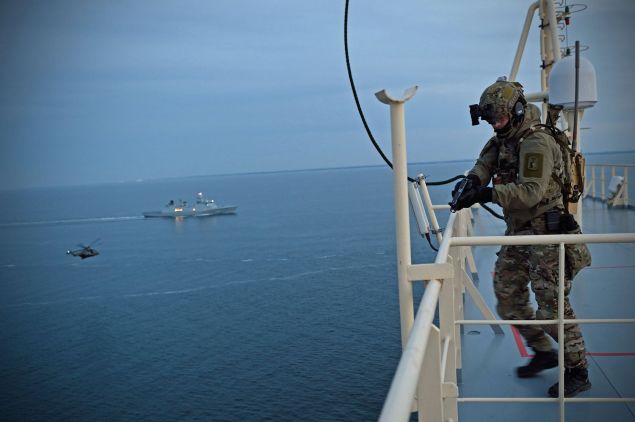 Mary Maersk provided the backdrop for the Royal Danish Navy in an anti-piracy training mission recently.

(Video link at the bottom)

It was a dramatic evening for Mary Maersk last Sunday. Sailing through the Fehmarn Belt dividing Denmark and Germany, 30 soldiers were suddenly lowered from helicopters to board the vessel. Members of the Frogman Corps – an elite commando unit of the Royal Danish Navy – their mission was to defeat the pirates who had taken control of the large container vessel.

It was all an exercise, of course, and piracy in the Baltic Sea has been non-existent for centuries. For the Royal Danish Navy, however, the rescue operation was designed to be as realistic as possible in preparing them for anti-piracy missions in the Gulf of Aden, where Danish troops are regularly posted as part of an international force.

The operation included a wide number of actors in a role-playing setting, including paramedics, military police and the pirates themselves. The frigate Niels Juel was close at hand throughout. After having successfully freed the crew, the elite unit proceeded to search the ship for any remaining threats before they could the mission a success.

Night Hawk is a multinational exercise for elite units, held every other year in Denmark since 2000. More than 1,300 soldiers from seven different countries take part in the exercise with support from helicopters, aircraft and ships.

Chief of the Frogman Corps Stefan Neubauer Andersen says: “The mission is absolutely serious in terms of what we have seen happen in the area off of Somalia. And it is an important part of securing Denmark’s maritime interests globally.”

Maersk Line contributed by offering access to the vessel, but makes it clear that the participation does not indicate any changes to the current threat assessment.