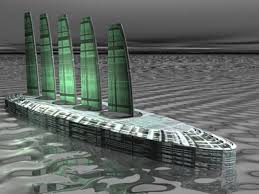 The time is now ripe for a fundamental change in shipping,” says Oskar Levander. From his base at the Norwegian seaport city of Alesund, the vice president for the marine technical wing of British manufacturer Rolls-Royce is talking about the future of the $450 billion global shipping industry. And in his view, the future is ghost ships.

Rolls-Royce Holdings (not to be confused with Rolls-Royce Motors) manufactures in a variety of sectors, including aerospace, defense and marine. It believes that one day we will rely on fully unmanned ships for the transport of goods across the world’s oceans. “There is a growing social acceptance for remote-controlled or autonomous systems, including cars and trains,” says Levander. “The move to unmanned ships will be gradual, probably coming first to waters within the jurisdiction of an individual state. Early examples of unmanned ships are likely to be bulk carriers or cargo vessels transporting nonhazardous goods.”

Esa Jokioinen, head of the Blue Ocean development team at Rolls-Royce, explains how a remote navigation system could work for ships as large as 600,000 tons: “The captain would sit at a shore location, receiving real-time data from sensors over a secure communications link. With multiple cameras around the vessel, a full picture is available, including a bird’s-eye view of the vessel in relation to its surroundings.” In other words, once the technology is in place, a ship moving goods from Hong Kong to Los Angeles could be controlled from a facility in Topeka, Kansas—or anywhere else.

A major portion of the training for new ship captains already takes place on land, and Jokioinen’s team has, she says, developed advanced 360-degree bridge-simulator systems, currently in use for education purposes. “These use complex mathematical models to provide the virtual world of a ship at sea and its response to control inputs,” Jokioinen says. “From there to using real inputs to generate the 360 view and control an actual vessel is a small step.”

Because human control of the ship is being moved from the ship’s bridge to a remote cockpit on shore, the responsibility of avoiding a collision remains in the hands of the captain rather than automated machinery.

The prospect of unmanned ghost ships navigating the world’s sea-lanes remotely may sound like science fiction, but the shipping industry has been seriously discussing the possibility for over 10 years. Rising fuel costs in recent years have meant that slower (and therefore less fuel-consuming) voyages are more economical—but long journeys are less attractive to crew members, so finding a willing crew can be difficult and very costly. The industry estimates that 44 percent of freighter costs are associated with human crews. The improved navigation, and removal of the habitation space and life support that comes with unmanned systems, will increase efficiency in each ship by up to 20 percent, says Rolls-Royce. It predicts a corresponding 20 percent reduction in emissions, as well.

In the past two years, the European Union has become so convinced of the inevitability of universally unmanned cargo freighters that it has invested $4.8 million to establish a project it calls MUNIN (Maritime Unmanned Navigation through Intelligence in Networks). “The main objective is to see how far we can automate all functions of the ship,” says MUNIN Project Coordinator Ornulf Jan Rodseth. “In the short term, we are looking to reduce crew numbers to perhaps one, with much of the navigation burden being conducted on-shore. Ultimately, I can see a time when maritime disasters are totally eliminated by automated technology.”

The U.S. Defense Department’s Tactical Technology Office (TTO) is developing the Anti-submarine warfare Continuous Trail Unmanned Vessel (ACTUV). The goal may be military, but the advantages are much the same as the EU’s. Efficiencies are gained by stripping out human life support systems for a leaner machine. The objective of ACTUV, according to the TTO website, is to “generate a vessel design that exceeds state-of-the-art platform performance to provide propulsive overmatch against diesel electric submarines at a fraction of their size and cost.” The Navy already has four operational drone boats, developed by the U.S. industrial conglomerate Textron Systems. As with many technologies (computers, GPS, microwaves), drone ship innovation could move swiftly from military to everyday commercial applications.

It will take some time, and there will, of course, be some pushback. The International Chamber of Shipping (ICS) represents 80 percent of the estimated 100,000 ships that traverse the Earth’s oceans. The organization’s director of external relations, Simon Bennett, believes we will have a long wait before unmanned ships pass the concept stage. “We’re looking at around 20 to 30 years before we can realistically expect ships to be sailing without crew,” Bennett says. “There is the hurdle of current international legislation, which strictly regulates minimum crew numbers. Politically, reducing crew numbers is still controversial, and there can be a tendency for humans to over-rely on technology. If technology fails, then we need to rely on our age-old seafaring skills.”

Bennett says a system called e-navigation will launch in the next 10 years, to automate the current vessel traffic management systems where, when the ship is close to shore, the local coast guard tells the crew what it should be doing. He acknowledges that those who believe ultimate control and accountability for a ship should remain with the captain and crew might find this unacceptable. “Increased remote control of shipping is a very controversial subject,” Bennett adds. “This is a debate we expect to have over the next 10 years, as the technology develops.”

In some quarters, in fact, there is open opposition to the idea of automating the shipping industry, on which 1.2 million jobs depend worldwide.

Jobs losses are not the only danger presented by crewless ghost ships. Antoine Martin, principal consultant of Unmanned Vehicle Systems Consulting LLC, points out that pirates might be a problem. According to the International Maritime Bureau Piracy Reporting Centre, from January to May 2014, there were 72 reported piracy incidents globally. It’s easy to imagine this number climbing with a proliferation of unmanned ships. “There would be no human hostage situation from piracy,” says Martin. “However, pirates might see the ships as easy targets. Having no crew or guard to watch for and evade pirates would make piracy easier. Robbers attack houses while people are on vacation or if a house seems unoccupied. Pirates would in all likelihood attack unmanned ships.”

On the other hand, if we’re able to build robot ships, why not hypothesize that ones with security technology would be just as good as their navigation?

“If we had unmanned ships, [piracy] wouldn’t be a problem—you could literally run an electric current all the way through the ship, because you wouldn’t have to worry about the crew members on board,” suggests Bennett, only half joking. He adds that the ideal unmanned ship would be designed and built without any crew cabins or support whatsoever anyway, so even if the pirates could board, there’d be nowhere for them to live or operate from.

Better yet, Bennett says, maybe geopolitics will catch up with the technology. “Hopefully, we’ll all be enjoying world peace and won’t have pirates anymore.”