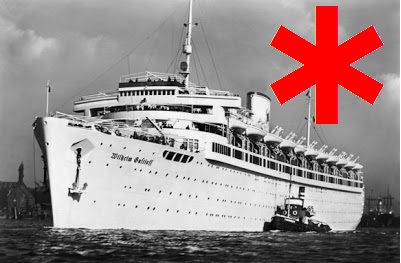 (www.MaritimeCyprus.com) The M/V Wilhelm Gustloff was launched in 1937 as a German passenger vessel. Initially used for cruises in the Baltic, it was briefly converted to a hospital ship at the start of World War II and then used as a barracks ship in German-occupied Gdynia. With the Russian assault in early 1945, the ship was designated to evacuate troops, auxiliaries, and civilians back to Germany.

It departed Gdynia early on the morning of 30 January 1945 with an estimated 10,000 persons onboard, including 5,000 children. Fearing a collision with a supposed Germany naval convoy that night, the master activated the ship’s navigation lights. The lights were observed by a Russian submarine, which fired three torpedoes. All hit their mark and the ship sank quickly, with only a few hundred survivors.

The loss of an estimated 9,300 persons makes it the largest loss of life resulting from the sinking of one vessel in maritime history.

Its death toll exceeded the RMS Titanic by around 7 times. This was one of the worst naval disasters ever recorded, but unfortunately it was considered a “war loss”, it was forgotten.