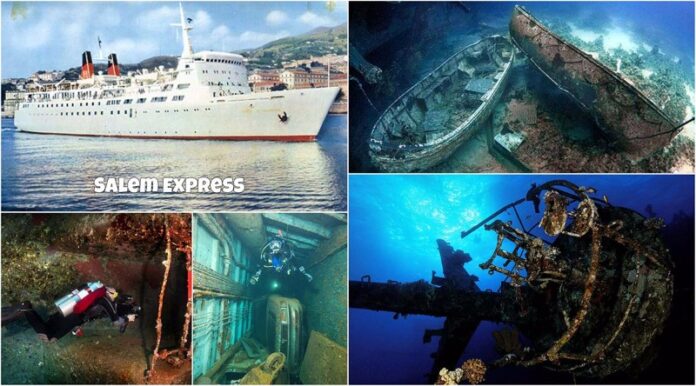 (www.MaritimeCyprus.com) The ‘Salem Express’ was launched in France in 1966 under the name ‘Fred Scamaroni’ and was a roll-on, roll-off ferry for vehicles and passengers in the Mediterranean. She was 100m long and 18m wide. In 1988 she was sold to the Samatour Shipping Company and started running trips between Safaga and Jeddah under the name ‘Salem Express’.

On the 17th of December 1991 she was returning from Jeddah with hundreds of pilgrims who had just been to Mecca. A storm was blowing gale force and people on the outer decks were getting drenched, so the captain decided to stay close to the shore to shave time off the journey, instead of taking the longer route along the outer reefs. Unfortunately the captain misjudged their position, and just after midnight the ship struck an outer pinnacle of Hyndman Reef. The result was disastrous.

Not only was water coming in from a hole in the starboard side, but the impact also caused the bow loading door to open, letting in thousands of gallons of water. Almost immediately the ferry started to list over to the starboard side, making it impossible for the crew to deploy any of the life boats.

The ‘Salem Express’ sank within 20 min of hitting the reef. Many people died trapped inside the wreck. Because of the severity of the storm and the fact that the tragedy occurred more than an hour from the port in the dead of the night, rescue boats arrived much too late to be of help and many of the 180 survivors had to swim to shore unaided. Loss of life was considerable, with the official figure being quoted as 470. Rumor suggest that the ship was overloaded and that the death toll was closer to 1200. Many bodies were recovered after the sinking, but eventually a halt was called due to the danger involved and the wreck was sealed with plates welded across openings.