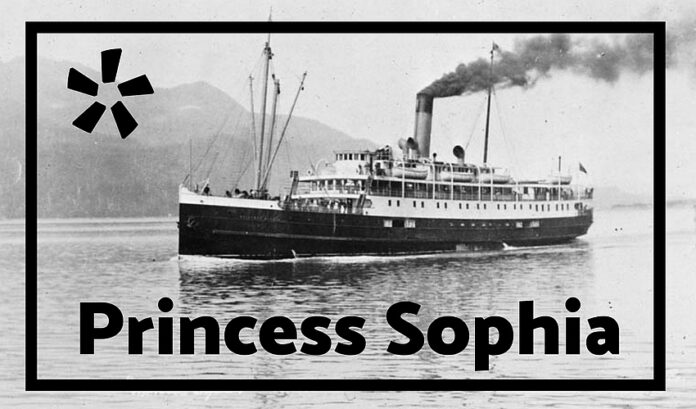 (www.MaritimeCyprus.com) The Princess Sophia departed Skagway at 10:10 pm on October 23, 1918, three hours behind schedule. Captain Leonard Locke was at the helm, with over twenty-five years of experience on the Pacific Northwest. Shortly after leaving port a North wind accelerated to upwards of 50 knots, and by the time the Sophia rounded Battery Point – only an hour after leaving Skagway – heavy snow and fog led to zero visibility. Navigational technology was limited. Her distance from the shore was miscalculated in the blinding storm, and the Sophia was blown dangerously off course.

On October 24 1918, at about 2:00 am, the Princess Sophia hit Vanderbilt Reef head-on at a speed of about 11 knots. The impact brought her hull right above the water to rest on the rocky outcrop, surrounded by raging seas. The Princess Sophia had not sustained any immediate damage, but angry winds blasting across her beam ground her hull against the rocks.

In these early hours panic was at a minimum. The electricity inside the Sophia still worked, so passengers and crew were comfortable, despite the harrowing circumstances. Fishing vessels Estebeth, Amy, E.A. Hegg and the Peterson were dispatched to help, and the Cedar and King & Winge soon followed. Captain Locke deemed it unsafe to transfer Sophia passengers in such heavy seas, and instead, thought it best to wait for the storm to die down to ensure everyone’s safety. Meanwhile, the storm eventually forced all surrounding vessels to retreat back to the shoreline.

The Princess Sophia waited in raging seas for over 40 hours. As time went on, panic grew. An SOS was sent down the coast to CPR Headquarters in Victoria, but it was 12 hours before Captain James Troup received the message. As matters grew worse, people wrote their wills and tucked letters to loved ones inside their pockets.

Sometime between 5:30 and 6:00 pm on October 25, 1918, the Princess Sophia sunk, taking all passengers and crew down with her. There were no survivors. All 364 persons on the ship (both American and Canadian) died, making the wreck of the Princess Sophia the worst maritime accident in the history of British Columbia and Alaska.