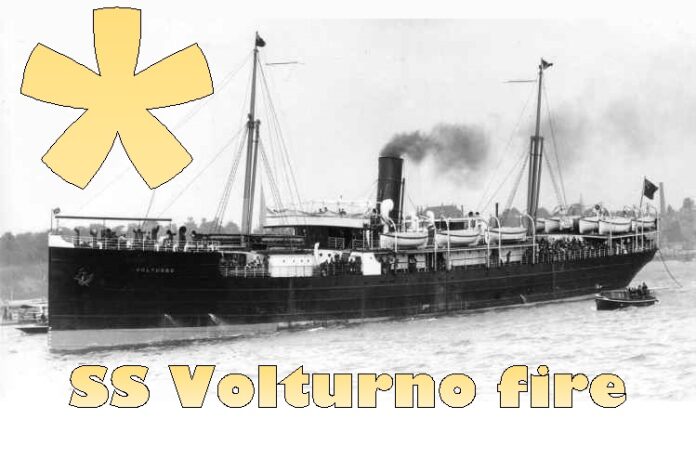 (www.MaritimeCyprus.com) SS Volturno was an ocean liner that burned and sank in the North Atlantic in October 1913. She was a Royal Line ship under charter to the Uranium Line at the time of the fire. After the ship issued SOS signals, eleven ships came to her aid and, in heavy seas and gale winds, rescued 520 passengers and crewmen. 136 people—most of them women and children in lifeboats launched unsuccessfully prior to the arrival of the rescue ships—died in the incident. Volturno had been built by Fairfield in Govan and was completed in November 1906.

At about 06:00 on 9 October 1913, Volturno, on a voyage from Rotterdam to New York City, was carrying a mixed load of passengers (mostly immigrants) and cargo that included highly flammable chemicals. It caught fire in the middle of a gale at 49.12N 34.51W in the North Atlantic. The cargo hold in the front of the ship was found to be fully engulfed in flames. Shortly afterwards part of the cargo exploded. Later the fire spread to the ship’s coal bunkers, cutting off the fuel supply for the fire hose pumps. The crew attempted to fight the fire for about two hours, but, realizing the severity of the fire and the limited options for dousing it on the high seas, Captain Francis Inch had his wireless operator send out SOS signals. Eleven ships responded to the calls and headed to Volturno‍ ’s reported position, arriving throughout the day and into the next. In the meantime, several of Volturno‍ ’s lifeboats with women and children aboard were launched with tragic results; all the boats either capsized or were smashed by the hull of the heaving ship, leaving no one alive from these first boats.

Captain James Clayton Barr of Carmania, the first ship to arrive, took command of the rescue effort. Barr had the other nine vessels form a “battle line” of sorts and slowly circle the burning ship. Throughout the night of 10/11 October, Carmania kept one of her searchlights on Volturno, with another sweeping the ring of rescue ships to help them avoid collisions. According to one passenger, despite Carmania‍ ’s efforts, two of the ships, the Red Star liner Kroonland and the French Line steamer La Touraine almost collided, coming within 15 to 20 feet (5 to 6 m) of impact. This was disputed by an officer on the Kroonland.

In the high seas, the rescue ships had launched lifeboats of their own to try and take passengers off the stricken Volturno, but the poor weather, high seas, and the reluctance of Volturno‍ ’s passengers to jump into the frigid waters hampered rescue efforts. On board Volturno, the crew and some of the male passengers, unable to extinguish the fire, were at least able to keep it from spreading to the aft cargo holds, over which the others on board were gathered. But, shortly before dawn, a large explosion—probably of her boilers—rocked Volturno. At this point, the rescuers felt that the ship, which had not been in imminent danger of sinking up to this point, might founder at any time. In the early morning of 11 October, the tanker SS Narragansett, one of the eleven rescue vessels, turned on her pumps and sprayed lubricating oil on the sea to help calm the surface. The combination of the oil and the lessening of the storm allowed many more lifeboats to be sent to Volturno‍ ’s aid.

With all boats recovered by 09:00, the rescue ships all resumed their original courses. In all, 521 passengers and crew members were rescued by ten of the eleven ships. The death toll was 136, mostly women and children from the early lifeboat launchings.

On the night of 17 October, the Dutch tanker Charlois, unaware of the events of the week before, came upon the still smoldering hulk of Volturno. Charlois lowered a boat that stood by, attempting to hail any possible survivors on board. When day broke on 18 October, Captain Schmidt saw the full extent of the damage, and realizing that Volturno was a hazard to passing ships, ordered Volturno‍ ’s seacocks opened; the ship then slowly sank.