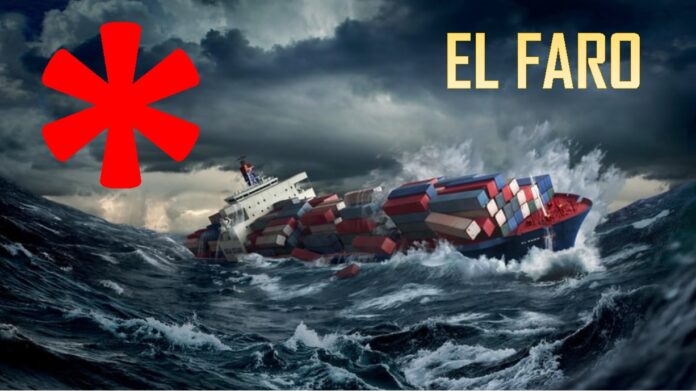 El FaroÂ departedÂ Jacksonville, Florida, bound for Puerto Rico at 8:10 pm EST on September 29, 2015, when then-Tropical Storm Joaquin was several hundred miles to the east. Two days later, after Joaquin had become aÂ CategoryÂ 3 hurricane, the vessel likely encounteredÂ swellsÂ of 20 to 40Â ft (6 to 12Â m) and winds over 80Â kn (150Â km/h; 92Â mph) as it sailed near the storm'sÂ eye. Around 7:30Â a.m. on October 1, the ship had taken on water and wasÂ listingÂ 15Â degrees. The last report from theÂ captain, however, indicated that the crew had contained the flooding. Shortly thereafter,Â El FaroÂ ceased all communications with shore.

On October 2, the 40-year-old ship was declared missing, and an extensive search operation was launched by theÂ United States Coast Guard, with help from theÂ Air Force,Â Air National Guard, andÂ Navy. They recovered debris and a damagedÂ lifeboat, and spotted (but could not recover) an unidentifiable body.Â El FaroÂ was declared sunk on October 5. The search was called off at sunset on October 7, by which time more than 183,000Â sqÂ nmi had been covered by aircraft and ships. The Navy sent theÂ USNSÂ ApacheÂ to conduct an underwater search forÂ El FaroÂ on October 19, 2015.Â TheÂ ApacheÂ identified a vessel on October 31 "consistent with [theÂ El Faro] cargo ship...in an upright position and in one piece."Â The next day, November 1, the Navy announced a submersible had returned images that identified the wreck as theÂ El Faro.

The deadliest shipping disaster involving a U.S.-flagged vessel in more than 30 years was caused by a captainâ€™s failure to avoid sailing into a hurricane despite numerous opportunities to route a course away from hazardous weather, theÂ National Transportation Safety BoardÂ announced during a public meeting.

â€œWe may never understand why the captain failed to heed his crewâ€™s concerns about sailing into the path of a hurricane, or why he refused to chart a safer course away from such dangerous weather,â€ saidÂ NTSB Chairman Robert L. Sumwalt.Â  â€œBut we know all too well the devastating consequences of those decisions.â€

NTSB investigators worked closely with the U.S. military and federal- and private-sector partners to locate the wreckage, photo- and video-document the ship and related debris field, and recover the El Faroâ€™s voyage data recorder from more than 15,000 feet under the surface of the sea.

The ship departed Florida Sept. 29, 2015, and had a range of navigation options that would have allowed it to steer clear of the storm that later became a Category 4 hurricane.Â  The captain, consulting outdated weather forecasts and ignoring the suggestions of his bridge officers to take the ship farther south and away from the storm, ordered a course that intersected with the path of a hurricane that pounded the ship with 35-foot seas and 100 mph winds.

As the ship sailed into the outer bands of the storm, about five hours prior to the sinking, its speed decreased and it began to list to starboard due to severe wind and seas.Â  In the last few hours of the voyage, the crew struggled to deal with a cascading series of events, any one of which could have endangered the ship on its own.

Seawater entered the ship through cargo loading and other openings on a partially enclosed deck in the shipâ€™s hull, pooled on the starboard side and poured through an open hatch into a cargo hold.Â  The hold began to fill with seawater, and automobiles in the hold broke free of lashings and likely ruptured a fire main pipe that could have allowed thousands of gallons of seawater per minute into the ship â€“ faster than could be removed by bilge pumps.

About 90 minutes before the sinking the listing ship lost its propulsion and was unable to maneuver, leaving it at the mercy of the sea.Â  Although the captain ordered the crew to abandon ship when the sinking was imminent, the crewâ€™s chances of survival were significantly reduced because El Faro was equipped with life rafts and open uncovered lifeboats, which met requirements but were ineffective in hurricane conditions.

The NTSB also said that the poor oversight and inadequate safety management system of the shipâ€™s operator, TOTE, contributed to the sinking.

â€œAlthough El Faro and its crew should never have found themselves in such treacherous weather, that ship was not destined to sink,â€ said Sumwalt.Â  â€œIf the crew had more information about the status of the hatches, how to best manage the flooding situation, and the shipâ€™s vulnerabilities when in a sustained list, the accident might have been prevented.â€

The complete accident report can be downloaded here.Â  TheÂ executive summary, including the findings, probable cause and safety recommendations is available atÂ https://go.usa.gov/xnRAn.

Additional information related to this investigation, including news releases, photographs, videos, and a link to the accident docket containing more than 30,000 pages of factual material, is available on theÂ El Faro accident investigation pageÂ atÂ http://go.usa.gov/xnRTW.

Lastly, The US National Transportation Safety Board (NTSB) issued a 16-pageÂ illustrated digest summarizing the critical events and decisions that led to the unfortunate event and a video documentary (further below). The digest synopsizes the more than 60 recommendations issued throughout the NTSBâ€™s investigation of the sinking. The infographics and summary make for an easy-to-read digest, compared with the thousands of pages that comprise the NTSBâ€™s final report and associated investigative documents, while still imparting potentially lifesaving information to our stakeholders. Click on below image to download the illustrated digest.