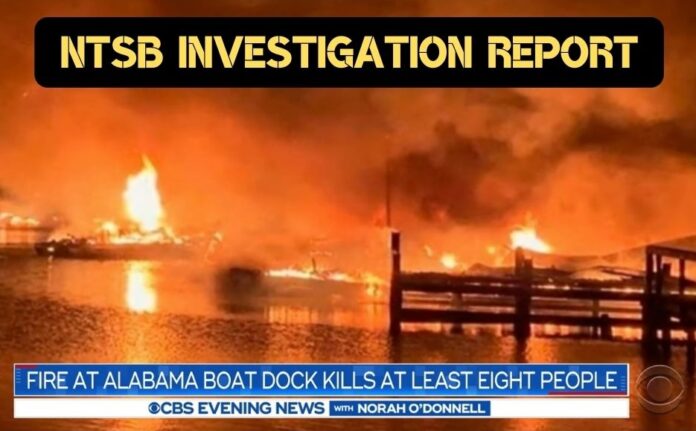 (www.MaritimeCyprus.com) The U.S. National Transportation Safety Board (NTSB), has issued the report of its investigation of the 27 January 2020 fire at the Jackson County Park Marina, and the Dixie Delight houseboat in Scottsboro, Alabama.

At about 0035 local time, fire broke out aboard theÂ Dixie Delight, a 43-foot live-aboard houseboat, tied to Dock B at the marina. The owner of the vessel attempted to extinguish the fire and push the burning vessel away from the dock, but the blaze engulfed the Dixie Delight and then spread to neighboring vessels and the wood-framed covered dock.

The fire trapped seventeen people on the dock. In the process of attempting to escape, eight people died. An estimated 4,000 gallons of fuel and lube oil were released, with the majority consumed during the fire.

The value of Dock B and the 35 vessels destroyed was estimated at more than US$500,000. The probable cause of the fire aboard the Dixie Delight and subsequent fire at Dock B was a fire of unknown source, originating aboard the Dixie Delight in the vicinity of the vesselâ€™s electrical panel. Contributing to the severity of the fire and loss of life were the County and marinaâ€™s limited fire safety practices.