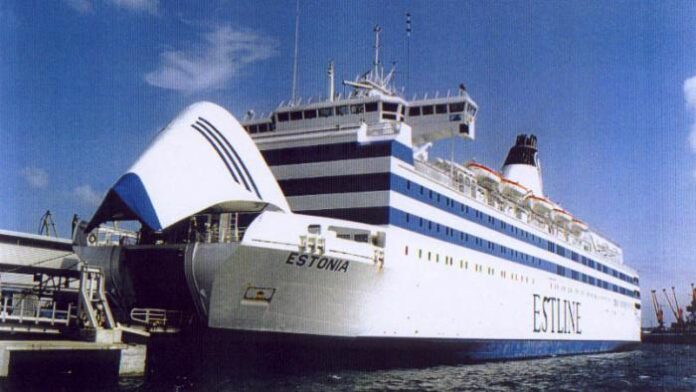 (www.MaritimeCyprus.com) The sinking of the ferry vessel MS Estonia in the Baltic Sea is an accident that will haunt the maritime domain for long years and even beyond. Caused by myriad reasons, this Baltic Sea accident was an event so unprecedented that the extent of the damages caused, both to life and to property, is still shocking even after so many years since the disaster occurred.

The unfortunate casualty resulted from failure of the bow visor door and subsequent flooding of the open vehicle deck with its large free surface. Subsequently, the IMO adopted special training requirements in crowd and crisis management for crews on passenger vessels. EPIRBS were required to activate automatically and voyage data recorders were mandated. Improved damage stability of passenger ships was also mandated.

As contrary to otherwise held beliefs, the MS Estonia was a ship with almost 15 years of successful ferrying service for four different owners and operators. Originally built at the start of the 80s, the vessel came under the ownership of her last operators, the Estonia Shipping Company, in the early 1990s.

Even though her impeccable service record was marred fatally and quite abruptly in the end, each of the vessel’s operational routes were extremely popular and in demand. Even her last operational route specially launched between the provinces of Tallinn (Estonia) to Stockholm (Sweden).

The MS Estonia sinking occurred in the year 1994 in the month of September as the vessel was passing through the Baltic Sea from the Estonian province of Tallinn to her intended destination of Stockholm. At the time of the MS Estonia disaster nearly 1,000 people were aboard it, both voyagers and crewing personnel included and only a minuscule proportion of people were managed to be successfully saved from the wreckage of the unfortunate vessel.

The timing of the voyage was such that turbulent climatic conditions plagued the transiting through the Baltic Sea. Heavy gales lashed the vessel, making steerage difficult whilst trying to maintain the speed of the vessel. Thus though a common thread about the actual causation of the disaster remains that the weather played a major role in destabilising the ship, sources vary in their account of how the vessel started to heel in the Baltic Sea.

Many references quote that the negligence of the crewing personnel to shut the doorways at the prow of the ship led to the seepage of water into the main deck of the vessel thus causing the MS Estonia to heel onto her right-hand side (starboard). Other information roots about the accident concur that while there was no negligence on the part of the crew professionals, the structure of the vessel was inadequate to enable the vessel to through the perennial harshness of the Baltic climate. This inadequacy manifested itself when the prow’s doorways were thrown open, thus causing water to seep into the vessel and fatally destroy it.

Though all communication channels failed immediately following the accident, feeble messages sent by way of the intermittently collapsing radio lines helped in the rescuing operations, however delayed they were. The rescue attempts were considerably hampered by the weather turbulence. Air rescuing campaigns were inordinately delayed which meant that only other vessels in the immediate vicinity could come to the aid of the distressed. Regrettably, by the time the rescue campaigns could be deployed thoroughly after the initial hassles, almost three-quarters of the voyagers had succumbed as the vessel sank to the depths of the frigid Baltic.

While some fortunate kin were able to receive the lost ones’ bodies from the water’s cold hold, with more than half the number of the dead didn’t even get this opportunity. The bodies of these voyagers still lie within the vessel, completely decomposed, as the MS Estonia serves as an unorthodox crematorium.The disaster claimed 852 lives.

Though these less-fortunate kith and kin speak about exhuming the bodies from their watery graveyard, the Swedish governmental officials decided in lieu of the exhumation to uphold the MS Estonia wreck as a memorial site. Alongside several European nations ratified what came to be known as the Estonia Agreement, in the year following the accident. As per the terms of this agreement, these nations and their nationals were barred from using the memorial as a underwater diving locale.

Soon following the MS Estonia disaster, rumors started circulating that the vessel was utilized to ferry naval armaments. The cause of the MS Estonia sinking was also placed on the accidental blow-up of the explosives stored within the ferry’s confines. However several drawn-out analyses concluded that the vessel was merely a voyager ferry that had encountered an accidental catastrophe in the most unexpected of manner with emotionally debilitating repercussions.

A Paris court rejected a compensation claim in July 2019 related to the 1994 sinking of an Estonian ferry, which remains one of Europe’s deadliest maritime disasters.

The court ruled on the claim from more than 1,000 survivors and relatives of victims of the accident in which a car ferry connecting the Estonian capital of Tallinn with Stockholm sank on Sept. 28, 1994, killing 852 people.

They sought 40.8 million euros ($46 million) from the French agency Bureau Veritas that deemed the ship seaworthy and the German shipbuilder Meyer-Werft.

But the French court in the western suburb of Nanterre threw out the claim, citing a lack of “intentional fault” attributable to either company in the case, the second-deadliest peacetime sinking of a European ship after the Titanic.

Henning Witte, a German lawyer who represents relatives in the case, told that Swedish news agency TT that the ruling was, “of course, a disappointment.”

“The circus continues. It is absolutely scandalous how the events around the Estonia disaster are being ignored, and especially the relatives,” Witte said.

Raivo Hellerma, a spokesman for Memento Mare, a group that represents mainly Estonian victims of the disaster, was more stoic, saying “we had no expectations” in the case. Hellerman lost his wife in the sinking.

An investigation that concluded in 1997 found that the locks on the ferry’s front, the prow door, had not held up to the strain of the waves, causing water to flood the car deck.

The case has been making its way through French courts since 1996, and had been retried on appeal twice.

Pls watch the below 2 videos of the Estonia:

Zero Hour – The Sinking of The Estonia 720p HD (Discovery)