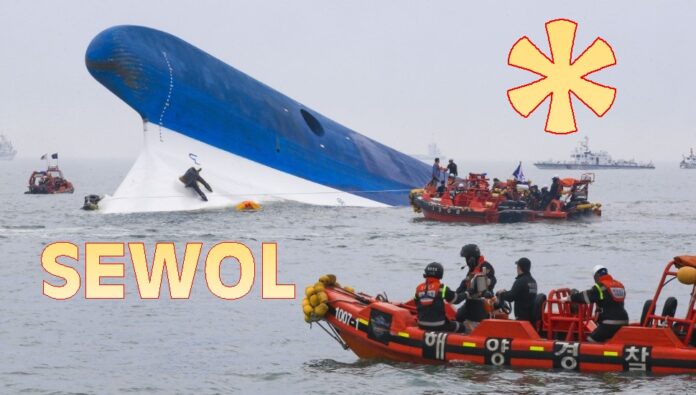 (www.MaritimeCyprus.com) M/V Sewol  was a ferry that was built by the Japanese company Hayashikane Shipbuilding & Engineering Co. Ltd in 1994. She could carry 921 passengers, or a total of 956 persons, including the crew. She had a legal capacity for 180 vehicles and 154 regular cargo containers. The maximum speed of the ship was 22 knots.

The Sewol was originally known as the Ferry Naminoue between 1994 and 2012, and had been operated in Japan for almost 18 years without any accidents. In 2012, the ship was later bought for ₩11.6 billion (US$11.3 million) by Chonghaejin Marine Company, renamed Sewol, and refurbished. Modifications included adding extra passenger cabins on the third, fourth, and fifth decks, raising the passenger capacity by 117, and increasing the weight of the ship by 239 tons.

After regulatory and safety checks by the Korean Register of Shipping, the ship began her operation in South Korea on 15 March 2013. The ship made three round-trips every week from Incheon to Jeju. In February 2014 it was reported that Sewol again passed a vessel safety inspection by the South Korean Coast Guard following an intermediate survey to ensure the ship remained in a general condition which satisfied requirements set by the Korean Register of Shipping.

On 16 April 2014 Sewol capsized and sank 1.5 kilometres off Donggeochado, Jindo County, South Jeolla Province on a voyage from Incheon to Jeju. At least 295 of those on board died.

The South Korea government’s Board of Audit and Inspection revealed that the Korean Register’s licensing was based on falsified documents. After the incident, the company reported that the ship was carrying 124 cars, 56 trucks, and 1157 tons of cargo. The amount of cargo carried was twice the legal limit.

On 12 February 2015, Kim Kyung-il, the coastguard captain, was sentenced to four years in prison.

The wreck of the Sewol ferry is carried on a giant heavy-lifting ship after it was raised from the seabed nearly three years after it sank.

The operation has completed what was seen as the most difficult part of the massive effort to bring the ship back to shore.

Government officials said it will take a week or two to bring the vessel to a port 90 kilometres away so that investigators could search for the remains of nine missing people, who were among the 304 who died when the Sewol capsized on April 16, 2014.

Most of the victims were students on a high school trip, touching off an outpouring of national grief and soul searching about long-ignored public safety and regulatory failures.

Public outrage over what was seen as a botched rescue job by the government contributed to the recent ouster of Park Geun-hye as president.

“We just got over one hump … we are trying hard to stay calm,” Lee Geum-hee, the mother of a missing school girl, said.

Bringing the Sewol back to the port in Mokpo would be a step toward finding closure to one of the country’s deadliest disasters.

Once the ferry reaches land, government officials said it would take about a month for the ship to be cleaned and evaluated for safety.

Investigators will then enter the wreckage and begin a three-month search for the remains of the missing victims and for clues further illuminating the cause of the sinking, which has been blamed on overloaded cargo, improper storage and other negligence.

Relatives of the missing victims, some of whom who were watching from two fishing boats just outside the operation area, cried as the blue-and-white right side of the ferry, rusty and scratched and with its painted name “SEWOL” no longer visible, emerged from the waters on Thursday morning.

A group representing the victim’s families has also demanded that it be part of an investigation committee that will be formed to further study the cause of the ship’s sinking.

The ferry’s captain is serving a life prison sentence for committing homicide through “wilful negligence” because he fled the ship without ordering an evacuation.

One of South Korea’s most notorious fugitives was arrested in the United States this week on ​ embezzlement charges ​at home stemming from the 2014 sinking of a ferry that killed more than 300 people, many of them high school students.

Yoo Hyuk-kee, 48, was arrested on Wednesday without incident at his home in Westchester County, N.Y., in response to an extradition request that South Korea submitted to the United States, a Justice Department spokeswoman said.

Mr. Yoo’s arrest ends ​a prolonged mystery over the whereabouts of the man South Korean investigators consider to be a central figure in the scandal surrounding the ferry’s sinking, which traumatized the nation. Prosecutors have said that rampant embezzlement by the Yoo family helped create unsafe conditions and practices on the Sewol ferry.

Mr. Yoo, also​ known by his English name, Keith Yoo, is a son of Yoo Byung-eun, whose family controlled the Chonghaejin Marine Company, the operator of the Sewol. The overloaded ferry capsized off the southwestern tip of South Korea in April 2014​ in the country’s worst disaster in decades.

Prosecutors later said that members of the Yoo family embezzled $169 million from a church that its patriarch ​helped ​found and from companies, including Chonghaejin, that were run with church funds and with loyal church members installed as business executives.

By diverting money, which could have been used for safety measures, the family contributed to its sinking, prosecutors said. They ​also said that the ferry operator had routinely overloaded its ships, including the Sewol, in part to help make up for the losses incurred by the family’s embezzlement. On its last journey, the Sewol was carrying twice as much cargo as it was allowed. In a separate civil trial, a Seoul court in January ordered Mr. Yoo to pay $46 million in damages to the government but ruled that embezzlement was not a direct cause of the ship’s sinking.

The investigation led South Korea to conduct its largest-ever manhunt for the family members.

The senior Mr. Yoo was found dead in an apparent suicide. His eldest son, Yoo Dae-kyoon, spent two years in prison for illegally taking nearly $6.8 million since 2002 from seven companies controlled by his family, including the Chonghaejin company. Other relatives and company executives were also convicted on embezzlement and other criminal charges. The captain of the Sewol, who abandoned ship early in the crisis, is serving a life sentence for murder for his irresponsible handling of the disaster.

But Yoo Hyuk-kee, the patriarch’s second son and once considered the likely heir to his father’s religious and business empire, had been elusive.

He had previously been spotted in the United States, and was known to have ​owned property in Westchester County. The South Korean authorities asked the U.S. Justice Department for help in apprehending him for eventual extradition.

Mr. Yoo was accused of conspiring with chief executives of the companies controlled by his family to defraud the businesses of $23 million through such sham contracts as “fraudulent” trademark licensing and business consulting agreements​, Derek Wikstrom, an assistant U.S. attorney in the Southern District of New York, said in ​the ​unsealed ​complaint ​against Mr. Yoo​.