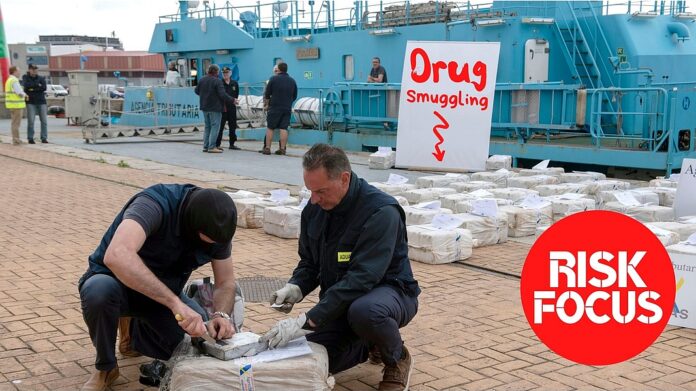 (www.MaritimeCyprus.com) Ships are attractive to drug traffickers. Security is usually lighter than the airline industry and they travel the world. Smuggling by sea has been a problem for years, but in recent years there have been some high-profile cases and evidence that the methods used are constantly evolving.

A conservative estimate values the illicit drug trade at over US$400 billion per year. In Colombia it’s cheaper to produce cocaine than coffee per gram. Match this with a huge global dependency on drugs, then it presents a low-cost, high-risk and potentially high-reward business model.

The potential for high profits attracts major international criminal organisations and terrorists. Those at the top are not the ones transporting the illicit goods. So, who is?

If a vessel is being used to smuggle drugs, it is very plausible that the crew have no idea whatsoever that drugs are on board. In such cases, it is possible that port staff may be involved, such as a stevedore who has access to parts of the vessel and can move around without raising suspicion. Or smugglers can board the vessel (or attach drugs to the hull) from the seaside or at anchorage. There are numerous opportunities.

Crew are vulnerable, however. Professional traffickers have been known to target crew, either by befriending them during shore leave or taking advantage of any money worries they might have or indeed a drug addiction. Blackmail might also be a factor.

Crew are attractive to traffickers. They have specific access to suitable hiding places on board, for example tanks, enclosed spaces and storerooms. Machinery spaces are ideal for secreting illicit material. Even if the crew member is not the actual courier, they can facilitate the passage of drugs on and off the ship.

In some cases, a courier might not be aware of the presence of a ‘minder’, whose purpose is to ensure nothing prevents the courier from doing their job even if it means interrupting the operation of the ship.

Crewmembers need to look after each other to stop an individual falling into a position where they become vulnerable and therefore a target. Companies should have confidential reporting systems that crew can trust.

Over 90% of goods are transported globally by sea and constantly changing trading patterns between emerging and developing countries create new opportunities to shift illicit goods.

Recent incidents have highlighted a notable increase in the finding of cocaine on vessels trading from Colombia to Mexico. One particular route is Barranquilla to Altamira. Another recent spike in incidents concerns the smuggling of cocaine from Ecuadorian ports. Drugs have also been found at discharge in ports in Turkey and Algeria.

There are too many locations on board of vessels where drugs could be smuggled to list them all. But below we list some of the areas where drugs are commonly found:

Concealment in bulk cargo: packages are hidden within the stow of a bulk cargo, which could be a clean grain cargo or a dirty one such as coal or ore. Drugs have been found close to ladders within the hold.

Containers: Common methods include breaking into the container (and replacing the security seal afterwards) and secreting the drugs with the cargo within. Reefer containers are targeted because the technical space that houses the refrigeration equipment can prove to be a handy hiding place.

Ro-Ro: drugs can be hidden in the cargo of cars, freight vehicles, trailers or coaches

Carry-on: Visitors or crew can quick simply walk on board and leave a package behind

External: Drugs can be attached to ship’s hull. Typically, the rudder trunk and in some cases divers stash drugs on to the underwater area of the hull of a stationary vessel.

On the move: Speedboats are sometimes used to attach drugs to moving vessels.

Preventing drugs getting onto your vessel

Trading in certain parts of the world will put a vessel and its crew at risk of being victims of drug trafficking. There is no magic solution in preventing a determined trafficker. However, there are measures that can be taken to keep safe.

The measures employed by a shipowner and the crew depend on the risk. A voyage from certain South American countries to North America or Europe is clearly higher risk. However, there are plenty other drug routes around the globe and this check should be part of a vessel’s voyage risk assessment.

It is very likely that where a substantial quantity of drugs is found on board a ship (rather than small quantities found on crew members) the ship will at the very least be detained so that a forensic investigation can take place. The master and the crew are also likely to be detained. In many jurisdictions, the authorities have power to seize the ship and sell it where illegal drugs are found on board.

The level of fines and the extent of the powers of the port and criminal authorities to detain ships on which illegal substances have been found varies from jurisdiction to jurisdiction, leaving shipowners vulnerable to loss of hire and, in extreme cases, high fines or forfeiture orders that result in the loss of the ship. We consider below the approach of various jurisdictions and the steps shipowners and their lenders can take to mitigate the risk of losses.

Fines and detention of ships in the US

Large fines can be imposed in the United States under the Maritime Drug Law Enforcement Act, of up to US$25m. These fines can be imposed against both US and non-US flagged vessels. In addition, the courts can also order the civil or criminal forfeiture of assets that enabled the crime to be committed. The judicial process for civil forfeiture may be brought before or after criminal charges are filed and may also be brought in the absence of criminal charges. The purpose of the civil trial would be to establish the US Government’s title to property that is traceable to the offence and property that facilitated its commission.

Seized assets can be temporarily released prior to initiation of forfeiture proceedings. Under forfeiture laws, a court may issue a restraining order permitting the release of property (including a ship) the subject to forfeiture, prior to the commencement of a judicial forfeiture proceeding. Upon a showing of probable cause, a court is authorized to enter a restraining order or injunction “or take any other action to preserve the availability” of property subject to forfeiture. Accordingly, a ship may, under certain conditions, be able to return to commercial service prior to forfeiture proceedings. These conditions typically include a large bond, consent to the court’s ongoing jurisdiction over the ship, and agreement by the ship’s owners, charterers, and managers to cooperate fully with authorities.

If civil forfeiture proceedings are initiated, the shipowner can try to use the “innocent owner” defence in which case the burden of proof will be on the shipowner. Under the Civil Asset Forfeiture Reform Act of 2000, an innocent owner can prevent their interest in property from being forfeited if they can prove that: (i) they did not know of the illegal conduct giving rise to the forfeiture or (ii) that upon learning of the criminal conduct (i.e. drug smuggling), they did everything within their reasonable power to stop the illegal conduct.

A recent example of how US authorities deal with ships found with drugs on board is the MSC Gayane case. The ship was raided on June 17, 2019 by the US Customs and Border Patrol (CBP) in Philadelphia. The raid follows the detention of MSC Desiree in March 2019 after 1,200 pounds of cocaine was found on board, again in the port of Philadelphia.

In the case of MSC Gayane, the ship was detained for nearly one month and released from US Custody on bail following the payment of $50m to the US Government. Its operator and the US Department of Justice have agreed that, in the event a judge decides to impose forfeiture on the ship, the ship will have 90 days to return to a US port. A major issue for the owners of ships in these circumstances is that the ship will be seized and held by the government until the legal processes are complete, which could be a matter of weeks, months or years, or until an interested party (such as the ship operator or shipowner) posts bail.

Detention of ships in the UK

Ships will undoubtedly be detained following drug seizure in the UK in order to investigate the crime.

The ship can also be forfeited under the Proceeds of Crime Act 2002 (POCA). POCA provides for a civil forfeiture regime under which the prosecutor may seize the proceeds of crime if the shipowner was found to be complicit in the drug-related offence.

In a situation where the shipowner is a defendant in the drug-related criminal conduct and is subsequently convicted, the prosecutor can apply to Court for a Confiscation Order ordering the owner to pay the amount of his benefit from his crime. Unlike US civil forfeiture proceedings, the Confiscation Order would not be directed towards a particular asset although the ship would be one of the various assets which could potentially be confiscated.

In a 2015 case the tugboat mv Hamal was stopped on the High Seas offshore Scotland and was found to be carrying 3.2 tonnes of cocaine. The master and the second in command were convicted of drug smuggling and the ship was forfeited and sold at auction.

Although there is no maximum fine under the Misuse of Drugs Act 1971 for shipowners who are found with drugs on board, they would have to be found to be complicit in the crime for a fine to be levied, and the amount of the fine would be likely to be far less than in the US.

Detention of ships in other countries

In 2014 the small tanker Noor 1 was found to be smuggling two tonnes of heroin into Greece. The owner of the ship and the broker received heavy prison sentences and the NOOR 1 was confiscated by the State. Three attempts were made to auction it with a starting price of €60,000, but all repeated auctions were unsuccessful. Noor 1 was then returned to its owners, a decision that surprised the market. An appeal is now pending before the public prosecutor against the decision of the court of appeal.

In the B Atlantic case, 132 kg of cocaine was found strapped to the ship’s hull ten metres below the waterline. It was accepted that unidentified third parties were responsible for the concealment of the drugs. On discovery, the ship was subject to a provision in the Venezuelan Anti-Drug law that the property, including ships employed to commit the investigated offence, will in all cases by seized as a preventative measure and that when there is an final and definitive judgment, an order will be made to confiscate the property.

Before entering into any mortgage, a bank would be well advised to review the security arrangements of the manager to ensure that proper vetting of the crew takes place and that there are security measures in place to prevent drug smuggling. Some trading routes will be higher risk than others. Furthermore, containerships are particularly vulnerable. It is notable that in the B Atlantic case, before the drugs were discovered, the master was warned to seal an underwater grille behind which a grappling hook, a saw, a rope and other tools had been found by divers. The master declined to do so because he thought it would delay the ship, with calamitous consequences for both him and the owners.

The main method of mitigating the risk of losses is by obtaining insurance that would cover the owners and/or their financing bank if the ship were confiscated.