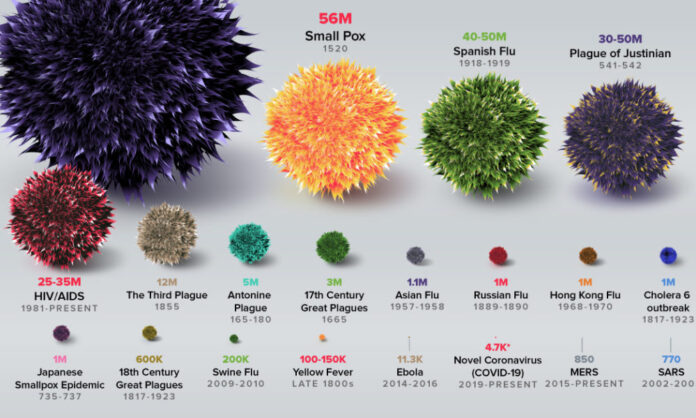 (www.MaritimeCyprus.com) As humans have spread across the world, so have infectious diseases. Even in this modern era, outbreaks are nearly constant, though not every outbreak reaches pandemic level as the Novel Coronavirus (COVID-19) has. Today’s visualization outlines some of history’s most deadly pandemics, from the Antonine Plague to the current COVID-19 event.

A Timeline of Historical Pandemics

Disease and illnesses have plagued humanity since the earliest days, our mortal flaw. However, it was not until the marked shift to agrarian communities that the scale and spread of these diseases increased dramatically.

Widespread trade created new opportunities for human and animal interactions that sped up such epidemics. Malaria, tuberculosis, leprosy, influenza, smallpox, and others first appeared during these early years.

Here are some of the major pandemics that have occurred over time:

Note: Many of the death toll numbers listed above are best estimates based on available research. Some, such as the Plague of Justinian, are subject to debate based on new evidence.