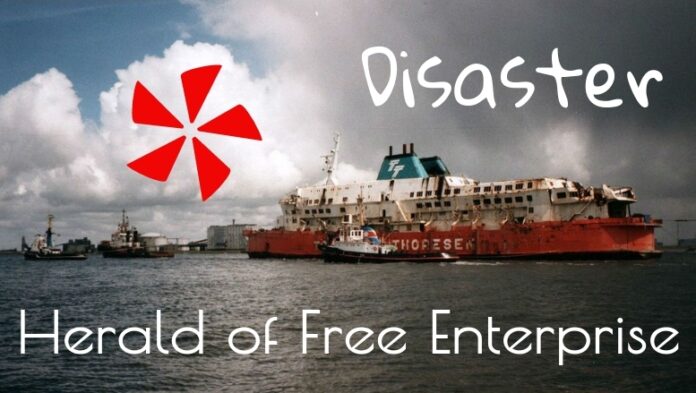 (www.MaritimeCyprus.com) Herald of Free Enterprise – Capsized and sank on 6 March 1987 due to taking on water just minutes after leaving the harbour at Zeebrugge in Belgium.

Following the accident and investigation, various changes were made to IMO regulations regarding design and operation of ro-ro passenger vessels. The incident was also the impetus for establishment of the UK Marine Accident Investigation Branch (MAIB).

The Secretary of State for Transport ordered a formal investigation in to the capsizing of the Herald using powers granted under The Merchant Shipping Act 1970. The investigation was presided over by the Hon. Mr. Justice Sheen, Wreck Commissioner. Sir Barry Sheen served as Admiralty judge of the High Court from 1978 to 1993. The only powers given to this court were investigative. It was to determine who should contribute to the investigations costs and was able to suspend or remove a Merchant Officers Certificate of Competency should that be required.

The report concluded that the Herald sank because it had sailed with the bow doors open and attributed this occurrence to serious negligence on the part of several crew members and the owners, Townsend Car Ferries Limited.  The report also highlighted several areas of concern relating to the spirit class vessel design and also to the companies operating policies.

The investigation found that the Herald was overloaded on weight and that this was a regular occurrence which Masters had alerted shore side management of, however found that this ‘was not in any way causative of the casualty’.

The report names several crew members negligence in their duties as contributing factors in the capsizing of the Herald. Mr Mark Victor Stanley is named as being the crew member responsible for ensuring the bow doors were closed, the report acknowledges that Mr. Stanley accepted responsibility for this and also that he will suffer remorse for many years to come.

The report criticised the attitude of Mr. Terence Ayling who was serving as bosun on the Herald.  He left G deck for his harbour station knowing that the bow doors were open and the assistant bosun was not present to close them.  When questioned regarding his actions he advised the enquiry that he did nothing about it because it had never been part of his duties.

Chief Officer Leslie Sabel gave evidence to the enquiry and was found to have given a conflicting statement to that which he had given earlier however the investigation recognised that Mr.Sabel had been seriously injured during the capsizing and that this may have affected his recollection of events.

Judge Sheen questioned why the failing of one member of staff could lead to such a catastrophe and why systems had not been implemented to ensure that the doors had been closed, particularly as this was not the first time a spirit class ferry had sailed with the bow doors open.

The final judgement taken from the report is as follows:

The Herald of Free Enterprise incident highlighted the need for an independent, unbiased investigative body.  This led to the formation of the Marine Accident Investigation Branch (MAIB) in 1989.  The official report of the investigation can be found on the MAIB website:

Watch video documentary below on the Herald of Free Enterprise disaster: