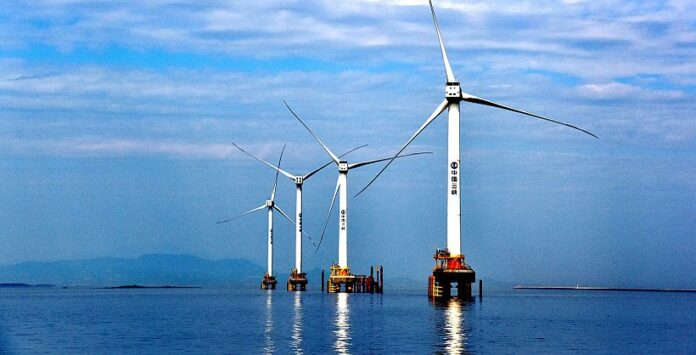 (www.MaritimeCyprus.com) The location, size and irregular shape of Offshore Renewable Energy Installations (OREI) present new challenges to the safe navigation and communication of shipping and emergency rescue. These difficulties could contribute to a marine casualty leading to injury, death or loss of property, either at sea or among the population ashore.

This guide provides details on the impact of OREIs on navigational safety and emergency response. The information is particularly useful for OREI developers. It also provides information on navigation and voyage planning to help you assess all risks and plan safe passage. Finally, this guide includes research on the impact of OREIs on marine radar, communications and positioning systems and search and rescue helicopter operations.

Existing or proposed OREIs in UK internal waters, territorial sea or in the Exclusive Economic Zone (EEZ) beyond the territorial sea have the potential to affect marine navigation and safety.

The impact must be assessed and mitigation measures put in place to ensure the safety of life at sea.  Assessments need to be made of the consequences of ships deviating from normal routes and recreational or fishing vessels entering shipping routes in order to avoid proposed sites.  As an OREI developer, you will need to ensure that you minimise the impact of your developments.

If you are an OREI developer seeking formal consent for marine works, you will need to consider recommendations from the Maritime and Coastguard Agency (MCA). If you fail to consider these recommendations, there may be objections to your proposal on the grounds of navigational safety or emergency response preparedness. Download Marine Guidance Note (MGN) 543 (M+F) Navigational, safety and emergency response guidance for OREIs.

You can find information on development consents and licensing for OREIs over 100 megawatts in England and Wales on the Infrastructure Planning Commission website and for OREIs in Scotland on the Marine Scotland website.

You can also find information on development consents and licensing for OREIs between 1 and 100 megawatts on the Marine Management Organisation website and Natural.

The recommendations also include information to address the navigational impact and emergency response of proposed OREI sites. The development of an OREI requires a clear consent process to deal with potential detrimental effects and should take account of local factors, national standards and international aspects which could influence the establishment of an OREI.

How and when the OREI recommendations should be used

If you are an OREI developer, you and your contracted environmental and risk assessors should take the recommendations into account for all sites within the jurisdiction of port limits or in open sea areas for the preparation of:

You may also be required to comply with specific criteria from port authorities. Also, where proposals within port limits could affect navigation or emergency planning or response, the port authorities will be under an obligation to review its safety management system, in accordance with the Port Marine Safety Code. You should undertake such reviews in parallel with your EIA, with the outcome addressed in the resulting ES.

You should comply with the recommendations during all phases of:

During these phases, you should immediately send information concerning the navigational impact to all relevant mariners, organisations and authorities.

You should plan and practice contingency arrangements to deal with marine casualties in or adjacent to sites, including responses to environmental pollution, to test their efficiency.

These recommendations can be changed or modified by the MCA - on the basis of experience or in accordance with internationally recognised standards - in the interest of safety of life at sea and protection of the marine environment.

You should assess navigational and communication impacts or difficulties around the site area and surroundings to determine any potential obstruction of, or danger to, seafarers or emergency response services. This assessment will also help to establish the best options to be adopted, including those of operational site monitoring.

You should consult with local and national search and rescue authorities, and consider the types of aircraft, vessels and equipment which might be used in emergencies. This should include the possible use of OREI structures as emergency refuges and any matters that might affect emergency response within or close to the OREI.

You should also assess the consequences of ships deviating from normal routes and recreational or fishing vessels entering shipping routes in order to avoid proposed sites. It is important to consider any situation which could lead to safety of navigation being compromised, eg:

When considering navigational priority, you should treat all seagoing water craft, operations and mariners as the same.

Around the UK, the number of Offshore Renewable Energy Installations (OREIs) is increasing and they may be close to shipping routes.

You should be aware that there is no right of access to any type of OREI. They are private property and appropriate warning signs are displayed. Access to an OREI requires skill and is limited by the state of the sea, and should only be undertaken in controlled circumstances by trained personnel.

When planning a voyage, mariners should assess all hazards and associated risks, including the proximity of wind farms and turbines, for example:

[Download MGN 372 (M+F) guidance for mariners on operating in the vicinity of OREIs in the UK (https://www.gov.uk/government/publications/mgn-372-guidance-to-mariners-operating-in-vicinity-of-uk-oreis).

Unlike wind farms, you may have difficulty seeing systems using wave or tidal energy as they are likely to be located at or near the surface, for example:

There are also many other devices that may have unique and very different designs to the more well-established types of technology, for example:

You will need to know the various methods by which WECs and TECs can be fixed to the seabed, as it will affect their visibility above the surface, for example:

There are a few safety zones in place around some UK offshore wind farms currently under construction, with more likely to be introduced in the near future, all of which will be monitored and policed.

A temporary safety zone may be established during the construction, major maintenance and decommissioning of OREIs and therefore should be avoided. Notices to mariners and radio navigation warning broadcasts may be used to inform people of such a zone, and chart and hydrographic publications will be used. These zones will be monitored by support craft which may include fishing vessels employed by developers as guard vessels.

Permanent safety zones are not expected to be established around entire wind farm groups, though single installations may be considered.

The effect on navigation and communication systems of OREIs

OREIs can be large and there could be several of them within a particular area. As a result, OREIs that cover large areas of open water can present potential hazards to navigation. This is particularly dangerous if there are a number of OREIs close to or encroaching into waters where there is a high density of shipping movements, fishing vessels and recreational craft usage.

Because of their nature, OREI positions are exposed to weather conditions and are often in shallow water, which could affect the navigation of vessels, particularly small craft and inshore shipping, gaining access to ports or to waters that provide a more sheltered passage required in bad weather and sea conditions. Also, tidal streams of varying sets and rates pass through all wind farm sites and some sites are within port limits or lie within Vessel Traffic Services (VTS) operational limits.

If you are within close range of an OREI, you should be able to rely on marine navigation systems as much as if you were in open sea. However, those requiring line of sight promulgation may be affected by wind turbines. You will also need to be able to detect other craft in the area and to take appropriate avoiding action.

Port authorities and VTS operators require effective detection, identification and tracking of vessels navigating in their areas to:

Emergency services such as Royal National Lifeboat Institution vessels and HM Coastguard require the ability to rapidly detect and react to maritime casualties.

If there is a failure of any radar, navigation or communication system it could:

If an incident involves a passenger vessel, or a vessel carrying dangerous and polluting cargo, it could have serious consequences for the public and the environment, both at sea and ashore.

Theoretical studies into the impact of OREIs on radio systems

Experiments were carried out to test the theoretical results from an earlier study that predicted the impact on marine radio systems by the North Hoyle wind farm, off the North Wales coast.

In the theoretical study, results showed that wind turbines have very large radar cross-sections, which scatter a large proportion of any incident electromagnetic energy. The turbines also cast shadows behind themselves, looking from the direction of the transmitter.

The study suggested that small vessels within the North Hoyle wind farm would be detectable with marine radar - both 3 gigahertz and 9 gigahertz - if they were not in the shadow of a turbine. However, detection of the vessel could be compromised if it was very close and directly behind a turbine. The effect of the shadow at 3 gigahertz was found to be much less severe than at 9 gigahertz.

The impact on Global Positioning Systems (GPS) was found to be minimal, with any interference very rarely causing any corruption to the GPS data. Unless a GPS receiver was within 70 metres (based on a signal-to-noise ratio of 15 decibels) of a wind turbine then any interference would be insignificant.

The study looked at very high frequency (VHF) communications and concluded that due to the wavelength of the VHF systems, any interference caused by wind turbines would be negligible.

The North Hoyle wind farm research tried to obtain scientific and practical operational data on the performance of various navigation and communications systems within and in the vicinity of offshore wind farms. The research focused on how the performance of systems would be adversely affected, with cost effective solutions recommended.

Four different trials were designed to test the validity of the results from the theoretical study and indicated that there is minimal impact on:

Ultra high frequency and other microwave systems suffered from the normal masking effect when turbines were in the line of the transmissions.

At close range, turbines may produce multiple reflected and side lobe echoes that can mask real targets. These develop at about 1.5 nautical miles, with radar displays becoming worse as the range closes.

Where a shipping lane passes within this range, considerable interference may be expected along a line of turbines.

The target size of the turbine echo increases close to the turbine, with target definition and bearing discrimination becoming worse on both 3 and 10 centimetre radars.

Following on from these trials, a critical assessment of search and rescue (SAR) activities within and close to offshore wind farms was carried out. This outcome may be used to inform the consents process of offshore wind farm applications.