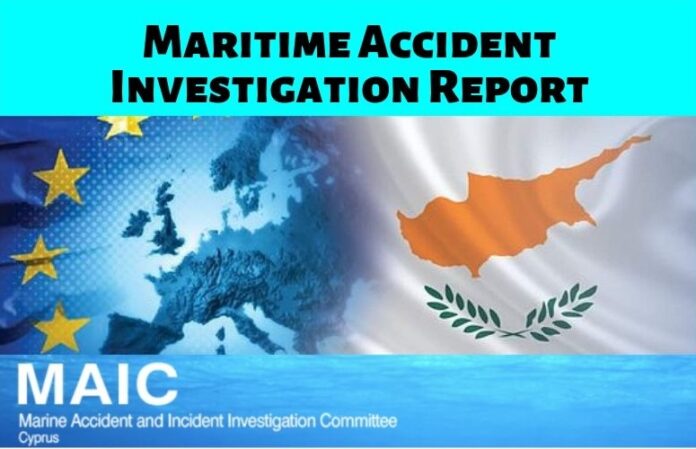 (www.MaritimeCyprus.com) The Cyprus Marine Accident and Incident Investigation Committee (MAIC) examines and investigates all types of marine accidents to or on board Cyprus Flag vessels worldwide, and other vessels in Cyprus territorial waters. The objective of the MAIC in investigating an accident, is the prevention of future accidents by establishing their root causes and circumstances.

An accident was investigated in which a seaman fell into the sea from a painting stage from where he was painting the ship’s hull and never was found. In conducting its investigation, the Marine Accident Investigation Committee (MAIC) reviewed events surrounding the accident, interviewed on board crew witnesses, reviewed documents provided by the Master and the vessel’s Management Company and performed analyses to determine the causal factors that contributed to the accident, including management system deficiencies.

After the noon’s lunch break, hull painting work was in progress at the ship’s starboard side near midships. Three crew members, the Bosun, AB1 and OS1 were tasked to perform spot painting on the side hull. The AB1 was alone on the painting stage doing the actual work. The Bosun was supervising and the OS1 was in attendance and assisting the AB1 from the main deck above the painting stage. Short time before the afternoon coffee break of 15:00 hours, the Bosun informed the AB1 to stop painting and prepare himself for climbing up. Before climbing up, AB1 had to wait for the rigging of a rope ladder by OS1.

When the Bosun pulled up the paint bucket, saw AB1’s safety harness still secured-hooked to the safety line. The AB1was resting on the painting stage waiting for the rigging of the rope ladder. At approximately 14:45 hours, while OS1 was rigging the ladder, heard AB1 shouting and when he looked over the ship’s starboard side, saw the AB1 into the sea.

Man-Over-Board procedure was immediately implemented. A Life-Ring with line was thrown towards the AB1. The Bosun jumped into the sea to rescue him. When he approached, saw him beneath the sea surface, sinking quickly.

The General Alarm was sounded, and “Man-Over-Board” was announced through the public address system. A digital selective call distress alert on VHF Ch. 70 was sent and by voice broadcast urgency message on VHF Ch. 16 PAN PAN “Man-Over-Board” X 3 times. MOB flag was raised by the Deck Cadet.