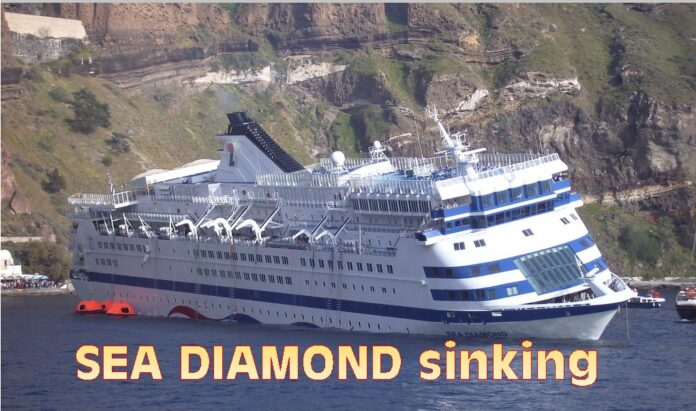 (www.MaritimeCyprus.com) The cruise ship, owned by Louis Hellenic Cruises, sank on April 5 2007 after ramming  a reef near the Aegean island of Santorini with 1,195 passengers and 391 crew on board. All onboard were safely evacuated except a French man, Jean Christophe Allain (age 45) and his daughter Maud (age 16), who were never found.

Originally named Birka Princess, the ship was built by the Finnish state-owned company Valmet at their Vuosaari shipyardin Helsinki at a cost of 350 million Finnish mark (€58,9 million). She was delivered in 1986 and operated for Birka Line in the Baltic Sea cruiseferry market, sailing on 24-hour cruises between Stockholm in Sweden and the Åland Islands in Finland. Between 1990 and 2003 she also made longer cruises around the Baltic Sea during the summer season.

Between 1992 and 2002, the ship's exterior was used to portray the fictional ship MS Freja in the Swedish TV soap operaRederiet.

As built, she had a small car deck, with space for 80 passenger cars and a rampon the port side in the rear. Like most cruiseferries in the Baltic Sea, she was built to ice class 1A.

In 1999 she was extensively refitted at Lloyd Werft in Germany at a cost of approximately US$26 million. The fore superstructure was extended and streamlined and 62 new passenger cabins were added, including a new deck of cabins above the bridge. In October 2004, when the new MS Birka Paradise was delivered, the Birka Princess started making two-night cruises from Stockholm to Turku, Helsinki and Tallinn, as well one weekly 24-hour cruise from Stockholm to Mariehamn. The new itineraries proved largely unsuccessful, and on January 2, 2006, the ship was laid up in Mariehamn and put up for sale.

In February 2006 she was sold to the Cyprus-based Louis Cruise Lines for US$35 million (€29.4 million). As built, the ship only had an indoor pool in the sauna section on deck 2 in the bow of the ship. A new outdoor swimming pool was installed and the sundeck area increased at Turku Repair Yard, Naantali. She entered service in the Mediterranean Sea as the second former Birka Line ship in the Louis Cruise Lines fleet, after MS Princesa Marissa, the former MS Prinsessan/Finnhansa. After the sale she was registered in Valletta, Malta. She changed flags in late 2006. At the time of her sinking she was owned by Elona Maritime Ltd, a company based in Malta,but registered at Piraeus, Greece.

Sinking
On April 5, 2007, at around 16:00 EEST (13:00 UTC) the ship ran aground on a well-marked volcanic reef east of Nea Kameni, within the caldera of the Greek island of Santorini, began taking on water, and listed up to 12 degrees to starboard before her watertight doors were reportedly closed (a report which was later refuted when the wreck was examined).  The 1,195 passengers, mostly Americans and 60 Canadians, were initially all reported to be safely evacuated in three and a half hours, with four injuries. Some passengers, including a group of 77 students from Paisley Magnet School in North Carolina, were evacuated from the car ramp through the former car deck onto boats, but some passengers had to climb down rope ladders from the higher decks. The ship was towed off the rocks, and her list stabilized. Later, it was reported that two French passengers were missing.

The large amount of water taken on board led to the ship sinking shortly before 7:00 EEST on April 6, 2007, only a few hundred meters from the shore. Video footage shows that, toward the end, the ship completely inverted before settling stern first onto the sea floor. It was later reported that the tip of the bulbous bow was only 62 meters (203 feet) below sea level, but the stern was in water up to 180 meters (590 feet) deep. It is feared that the wreck would soon slide deeper and sink into the submerged caldera of the volcanic island. It has been speculated that the deep, almost vertical shore of the bathtub-like caldera made it impossible to beach the ship and save her from becoming a total loss.

Two French citizens, Jean Christophe Allain, aged 45, and his daughter Maud, 16, were listed as missing. Allain's wife said her cabin filled with water when the ship struck rocks and that she narrowly escaped. She was not sure whether her husband and daughter made it out because the events happened so suddenly. Her son was on deck at the time and was evacuated safely. The family were accommodated in cabin 2014 an outside standard cabin on the starboard side of the vessel on deck 2, the lowest passenger deck.

Divers examined the wreck on April 6 to gather information on the ship's current position and to seek the missing passengers. The underwater search of this cabin recovered nothing. Divers continued searching on April 10, but nothing was reported. Later in the same day, local governors apologized to the French family for their missing relatives. The black box containing the recordings of the conversations before the crash was discovered on April 15, while the bodies of the two missing persons were never found.

On April 7, Greek authorities announced that they were charging the captain and five other officers with negligence. State television reported they were charged with causing a shipwreck through negligence, breaching international shipping safety regulations and polluting the environment. Additional charges could be made depending on the fate of the two missing passengers. All six were released until further notice but if convicted they could face a five-year prison sentence.

On April 13, 2007, it was reported that investigators using a remotely controlled submarine found the ship's data recorder (VDR). In a struggle to protect the data, they secured it in a special sterilized bin and the authorities were to have transferred it to the United States in order to reveal the saved data, an action that only the manufacturer of the VDR can perform. The Greek Merchant Marine Ministry said the recorder could reveal details of the sinking of the ship which could be used in the prosecution of crew members.

Investigations carried out by the defense team of the Master of the Vessel and Louis Cruise Lines, after a lawsuit had been filed against them, have included a new hydrographic survey of the area of the accident in Santorini. This survey was carried out by Akti Engineering, and discovered discrepancies between the actual mapping of the sea area and the official charts used by the Sea Diamond (and all other vessels) at the time of the accident. The detailed survey claimed that the reef, which the Sea Diamond struck, is in fact lying at 131 meters (429 feet) from shore and not at a distance of 57 meters (187 feet) as is incorrectly marked on the nautical chart. The official chart also shows the depth of the water at the area of impact varying from 18–22 meters, whilst the recent survey shows that it is only 5 meters.

A Greek scuba diver gathering evidence for a judicial investigation of the Sea Diamond shipwreck died in October 2007 from decompression sickness after ascending too quickly.

In order to avoid an oil spill, plans were made to recover some 450 tonnes (496 short tons) of fuel from the ship's tanks. As of September 20, 2007, fuel had started to leak into other parts of the ship, but not yet into the surrounding environment. In June, 2009, the fuel was pumped off the wreck. On May 14, 2007, it was announced that Louis Cruise Lines had bought M/S Silja Opera (renaming it M/S Cristal) to replace the Sea Diamond.

On June 19, 2007, the owners, operator and captain of the Sea Diamond cruise ship were fined €1.17 million for causing marine pollution.

On August 21, 2007, a lawsuit was filed in United States federal court on behalf of the passengers who were aboard the ship when she sank.

After six years in the courts, the Sea Diamond captain and an insurance company employee were given 12 and 8 years jail sentences, respectively. The Greek newspaper Eleftherotypia (now defunct) speculated no actual jail time would be served.

The Piraeus appeals court ruled the captain of the Louis Hellenic Cruise Lines vessel, which ran aground near the island’s Athinios port, the first mate and the head of operations ashore were all guilty of negligence. Capt. Yiannis Marinos, 38 at the time, was handed a five-year jail sentence, which he can buy out for €5 a day, some €9,125 ($12,400) in total. At the initial trial he had received a sentence of 12 years and two months. The head of operations was given a three-year term suspended for three years, and the first mate a 26-month suspended sentence. However, five others, including two representatives of the cruise company, were cleared of any wrongdoing.

After the sinking there was much demand from the residents of Santorini for the wreck be raised and removed. Further questions were posed but never answered as to why the ship was moved to deeper water to be allowed to sink in the first place. In May 2011, the Greek government claimed that removing the Sea Diamond would be "too costly" and said that the 150-million-euro cost of raising the ship should be the responsibility of the insurers and company that owned the ship. The latter two have no plans to raise the ship, however, and nothing will be resolved.

In October 2017 the Merchant Marine Ministry of Greece announced the wreck will be raised, out of environmental and navigational concerns.