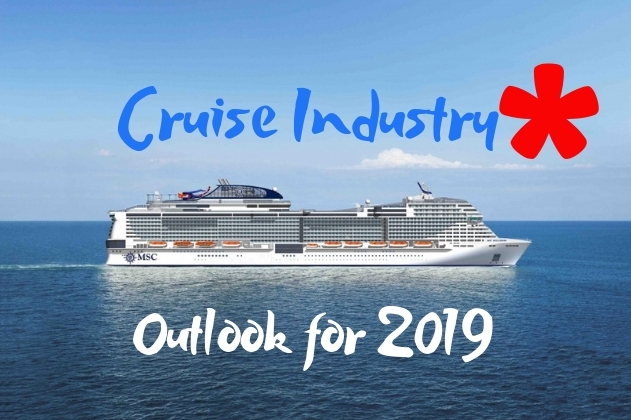 Also impressive will be technology gains, with guests benefiting from the latest connectivity and apps that integrate into the cruise experience while cruise lines continue an arms race to save fuel and reduce their environmental footprint. Among challenge areas are new shipbuilders and emerging markets.

Twenty-four new ships will debut in 2019, making it the biggest year ever for new ship introductions.

The Mein Schiff 2 from TUI Cruises will be the first of the 24 new ships delivered, according to projections.

The biggest vessel to enter service this year will be the Costa Smeralda with capacity for 5,224 passengers.

MSC's Grandiosa, a Meraviglia-plus class ship, is also large, and will debut in November with capacity for just under 5,000 guests.

The smallest ship debuting? The 100-guest Magellan Explorer from Antarctica21.

MSC is one of four cruise lines with big ship introduction plans in 2019, with the Grandiosa debuting as well as the Bellissima.

French luxury line Ponant will get a pair of 180-guest Explorer-class ships, and Costa will take delivery of two megaships.

The Costa Venezia debuts in March from Fincantieri and moves to China for year-round service, while the Smeralda will debut later in the year and sail in Europe.

Brands are coming into the cruise industry with newbuild projects and secondhand ships.

Jalesh Cruises will start service in April from Mumbai, offering a short-cruise product for the Indian source market.

In China, CTS (China Travel Service) is expected to start service in the third quarter, which will help boost capacity in the region, which is considerably lower.

Heading into the future, both The Ritz-Carlton Yacht Collection and Virgin Voyages are bringing their new brands and bold new concepts and their brands into the industry with newbuild projects.

New ships on order and set to be delivered in 2019 represent an additional 42,488 berths into the industry, obliterating 2018’s record introduction of approximately 34,000 new berths.

According to the 2019 Cruise Industry News Annual Report, the 42,488 berths represent 7.5 percent additional berths across the industry.

The companies with the biggest plans to fill cabins this year are both European brands. MSC will add 9,388 berths between the Bellissima and Grandiosa, while Costa will add 9,120 berths with the Costa Venezia and Smeralda.

Refurbishment projects across the industry are only growing in scale.

The biggest project this year, and the biggest dry-dock ever to take place, will see the Carnival Triumph converted into the Carnival Sunrise over a two-month work period in Cadiz with a budget of $200 million. The ship will debut in Norfolk, Virginia in late April with additional capacity, and a number of new entertainment and food and beverage features.

Elsewhere, Royal Caribbean International’s Navigator of the Seas will be re-imagined with a budget of $115 million  and then reintroduced into the hot short cruise market in May 2019.

The newbuild boom in the expedition market that saw the first of a large number of new ships launching in 2018 shows no signs of slowing down for 2019.

Expedition newbuilds are all over the orderbook this year, with 12 expedition ships set to launch into service.

Hapag-Lloyd Cruises has the single biggest year, with 460 berths coming online with the Hanseatic Nature and Hanseatic Inspiration.

Ponant will mark its second year in a row in which it takes delivery of two ships as well, with the new Le Bougainville being joined by Le Dumont-d'Urville.

The most notable delivery will happen in China, as SunStone will welcome the first of up to 10 expedition newbuilds. The Greg Mortimer will debut in August on a long-term charter contract to Aurora Expeditions.

China was set to become the world’s largest cruise market, and may still get there, but 2019 will be about the so-called readjustment period in the region.

Too much supply brought on too fast, a challenged distribution model (chartering), a short-in booking window and lack of product differentiation put a stop to runaway growth in China.

A readjustment period is now the term, and will give Chinese officials time to work on policies and port development; it will also give way to another new Chinese cruise brand coming late this year.

The company will take delivery of the Costa Atlantica in late 2019, followed by the Costa Mediterranea a year later.

Delayed deliveries, strikes, ownership changes and other major questions revolve around a new set of shipyards that have aggressively entered the cruise business in recent years.

Facing a collapse in the offshore business, shipyards turned to small, expedition and niche cruise lines to gain business back.

Those yards have been met with a host of challenges ranging from ownership changes to yard strikes as they have found out that building a cruise ship is a highly complex task – mainly attributed to the customized hotel aspect of the project.

While Princess Cruises continues to roll out its OceanMedallion platform, the cruise lines are working hard to upgrade connectivity and provide new apps and digital experiences for passengers.

Royal Caribbean Cruises is utilizing facial recognition to get passengers onboard the ship within 10 minutes of arriving at the terminal; while on the new Celebrity Edge, guests can use an app to turn on and off stateroom lights and even unlock the door.

At MSC Cruises, a personal assistant, Zoe, will debut in every stateroom aboard the Bellissima when the ship is delivered in February.

Passenger-facing apps and connectivity solutions will continue to be hot topics, but behind-the-scenes, a technical arms race will continue to save fuel while lowering environmental impact when it comes to air and water emissions.