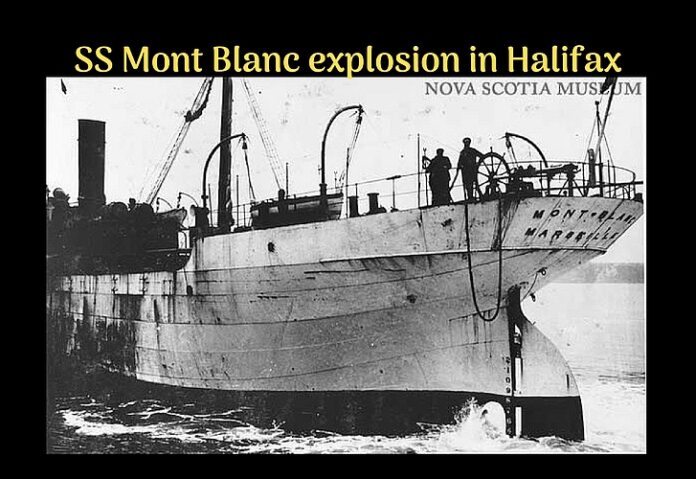 (www.MaritimeCyprus.com) The Halifax Explosion was caused when two ships collided in the narrowest part of Halifax Harbor on the morning of Thursday, December 6, 1917. The SS Mont Blanc, a French ship was arriving from New York City filled with military explosives and ammunition from New York to France for World War I in Europe. In addition to the 2,925 tons of explosives in its hold, it carried barrels of highly flammable benzol and picric acid on the deck. Unable to travel with its scheduled convoy across the Atlantic, the Mont Blanc went to Halifax so it could travel with a new group.

It arrived the night before and had to wait outside the anti-submarine net that protected the harbor. At dawn, it began to move into the harbor. Normally a munitions ship would fly a red flag to warn others of the dangerous cargo, but the Mont Blanc did not raise its warning flag.

Meanwhile, the SS Imo, a Norwegian ship carrying Belgian relief supplies that had been held up in the harbor for several days, began to move down the harbor toward the Atlantic. The Imo’s captain was angry because he had been delayed and so he put to sea without the harbor master’s permission.

The two ships were maneuvering for position as they met in the Narrows between Halifax on the southern shore and Dartmouth on the northern shore. Initially, the Imo refused to give way. Once it began to turn out of the Mont Blanc’s path, it could not move fast enough to avoid a collision.

Barrels on deck broke loose with the impact, and sparks from the scraping metal ignited the benzol that had spilled across the deck. The Mont Blanc’s captain recognized the terrible danger of these fires and abandoned ship, rowing with the crew to the Dartmouth shore. The damaged and burning Mont Blanc drifted to shore in the heavily populated wharf area of Halifax.

Crowds gathered on the shore and at windows to watch the burning ship run aground. Barrels of benzol began to shoot into the air like fireworks and explode. More people gathered to watch. Approximately 20 minutes after the collision—at 9:04 a.m.—the fires ignited the 2,925 tons of munitions on the Mont Blanc and the ship exploded.

A fraction of a second — that’s the duration of the explosion that blew apart the Mont-Blanc and caused such colossal damage in Halifax harbour. It is estimated the temperature at the epicentre of the blast reached 5,000 C, which vapourized the water immediately surrounding the ship. Astonishingly, the impact shattered windows more than 80 kilometres away. The entire crew survived, except for one individual killed by falling debris. The explosion, though, was so powerful that it destroyed major parts of the nearby buildings and houses, killing approximately 2,000 residents in Halifax and Dartmouth.

Watch the relevant video documentary below: