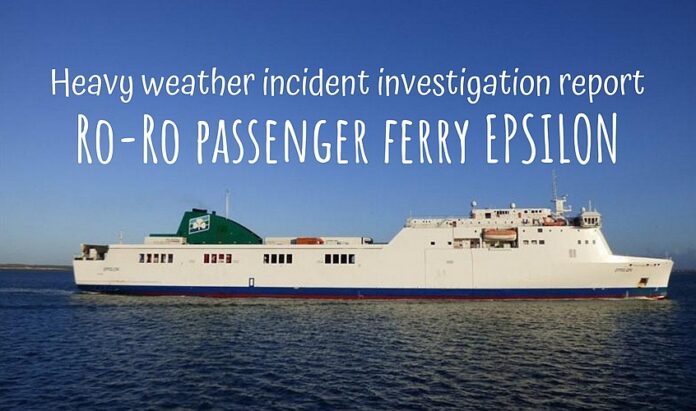 (www.MaritimeCyprus.com) The Irish Marine Casualty Investigation Board (MCIB) issued the report of its investigation into the heavy weather incident involving the ro-ro passenger ferry EPSILON on 8 February 2016. The ferry was managed by Matrix Shipmanagement and was enroute from Cherbourg to Dublin. As the weather worsened, the ferry sought shelter in Barnstable Bay, England. Since anchoring was deemed unsafe, it was decided to slow-steam back and forth across the bay. During one turn, the ferry rolled heavily and cargo on four decks shifted, causing injuries to some passengers and crew and damage to some cargo. Investigation revealed that the master was unfamiliar with the use of weather routing and that the cargo had not be fully secured.

SUMMARY
On the afternoon of Sunday the 7th February 2016, ‘MV Epsilon’ sailed from Cherbourg in France bound for Dublin, Ireland. Having departed Cherbourg, the vessel crossed the English Channel in a north-westerly direction.

It then proceeded in a westerly direction along the English Channel in the direction of Land’s End. As the vessel proceeded west, the steadily increasing westerly wind and sea conditions reduced its speed over the ground.

As the night progressed, the vessel’s speed was further reduced due to the effects of the worsening weather and sea conditions. The vessel continued around Land’s End in a north-westerly direction before turning on to a north-easterly course.

As the wind and weather continued to deteriorate, the Master took the decision to seek shelter in Barnstaple Bay. Having entered the bay and assessed the conditions for anchoring, the Master decided it would be unsafe to anchor and advised all shipboard departments of his intention to ‘slow-steam’ back and forth across the bay until the weather conditions improved.

During one turn the vessel rolled heavily and the cargo on decks one, three, four and five shifted causing damage to cargo and some injuries to crew and to passengers. Once the weather improved sufficiently, the vessel departed from Barnstaple Bay and resumed its passage to Dublin Port, arriving on the morning of the 9th February 2016.