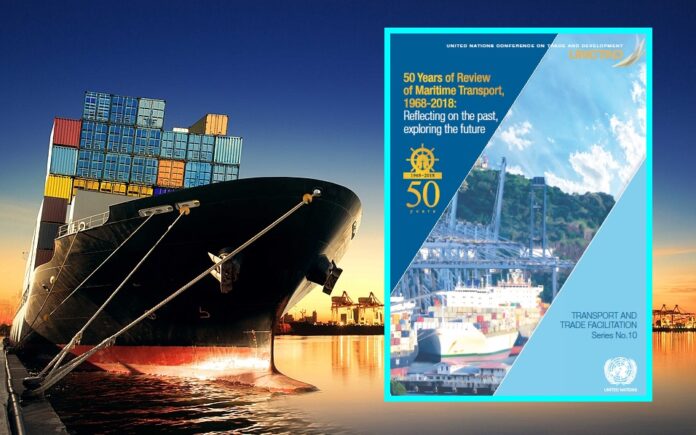 (www.MaritimeCyprus.com) Over the last 50 years seaborne trade has seen a remarkable development. Shipping carries the vast majority of international trade with its share ranging between 80 and 90 per cent of trade. This predominance is particularly pronounced in developing countries where trade structures including the low volumes of intraregional trade leave limited space for land transport and air transport. In terms of trade value, of course, the shipping share is considerably lower with various estimates hovering around 60 to 70 per cent of trade. Meanwhile, air transport, including express carriage, is on the rise, making considerable inroads in the field of higher valued cargoes.

UNCTAD’s Review is unique and unrivaled. It remains the only global publication that annually covers relevant technical and policy aspects of maritime transport, combines both short term and long-term perspectives, supports sound maritime transport policy-making, informs relevant intergovernmental deliberations, while at the same time, bearing in mind the concerns of developing countries.

This special commemorative issue is timely and auspicious as the 50th anniversary is taking place at the intersection of several developments. The anniversary coincides with the world community committing to achieving a sustainable development path, a climate-friendly world and prosperity for all. It also coincides with early stages of the Fourth Industrial revolution driven by digitalization, with its myriad of challenges and opportunities. It is also taking place at a time of growing trade policy risks that could undermine a multilateral rule-based trading system and dampen the demand for maritime transport, which handles over 80 per cent of world trade volumes. Together, these new realities underscore the imperative for UNCTAD to reflect on how best the Review can continue to report on relevant developments and generate useful insights and requisite data that underpin evidence-based maritime transport policy-making.