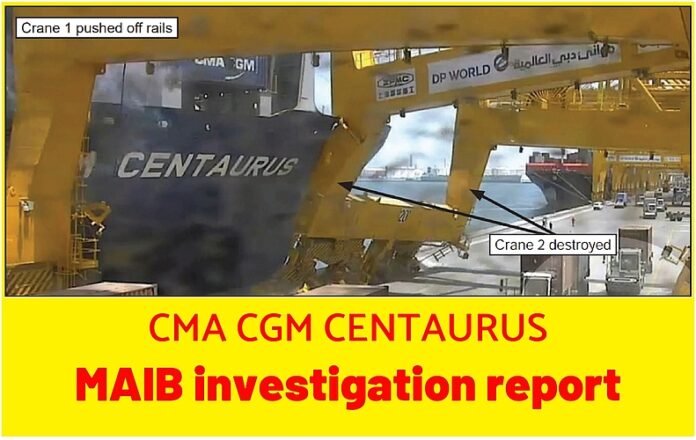 (www.MaritimeCyprus.com) The UK Marine Accident Investigation Branch (MAIB) issued the report of its investigation of the heavy contact with the quay and two shore cranes by the container ship CMA CGM Centaurus at Jebel Ali, UAE on 4 May 2017. The casualty was the result of the pilot making the turn into the basin at too great a speed.

At 1137 on 4 May 2017, the UK registered container ship CMA CGM Centaurus made heavy contact with the quay and two shore cranes while executing a turn under pilotage during its arrival at Jebel Ali, United Arab Emirates. The accident resulted in the collapse of a shore crane and 10 injuries, including one serious injury, to shore personnel.

The MAIB investigation established that CMA CGM Centaurus was going too fast for the intended manoeuver when the pilot started the turn. The pilot was aware that the ship might have been travelling a little faster than he would have liked when he initiated the turn, but was content that the ship would be able to complete it. The ship’s bridge team were uncertain of the maximum speed required to complete the turn safely. There was no agreed plan for the intended manoeuver, and therefore no shared mental model between the bridge team and the pilot. Consequently, the pilot was operating in isolation without the support of the bridge team, allowing the pilot’s decision-making to become a single system point of failure.

The pilot’s performance was focused on efficiency, which influenced his decision to turn the ship into the basin without ensuring that the manoeuvre was conducted at a sufficiently slow speed to enable its safe completion. The pilot’s decision to turn at high speed was not effectively challenged because the ship’s bridge team lacked the necessary knowledge and experience to be able to confidently intervene and correct the pilot’s action.
The size of container ships has grown at a rapid pace, yet ports remain largely the same. Margins for error are therefore decreasing. It is imperative that pilots and ships’ bridge teams work together and implement the best practices of Bridge Resource Management to ensure the safety of both ships and ports.

Action has been taken by CMA Ships to improve onboard pilotage management throughout its fleet. A recommendation has been made to DP World UAE Region aimed at improving its management of pilotage and berthing operations in respect of large container ship movements within the port of Jebel Ali.

Watch video below showing the incident: