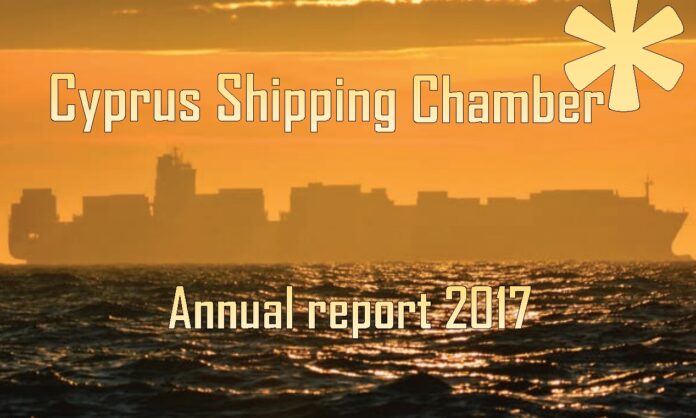 (www.MaritimeCyprus.com) Reviewing 2017, the Cyprus Registry ranked again as the 11th largest merchant fleet worldwide and the 3rd largest fleet in the European Union (EU). According to the Cyprus Shipping Chamber’s Annual Report for 2017, Cyprus is considered to be the largest Shipmanagement Centre in the EU and among the three largest globally.

Furthermore, in excess of 200 internationally known and recognised Shipowning, Shipmanagement, Chartering and Shipping related companies operate from Cyprus. The wider Shipping Sector employs approximately 4,500 employees ashore and 55,000 seafarers.   The Shipping Industry supports the Cyprus Economy without any State investment, and operates successfully on a global basis, controlling a fleet of 2200 vessels. The Cyprus Register is also considered internationally as one of the most qualitative and safest registries globally.

The overall Shipping operational and taxation infrastructure in Cyprus has remained intact. As such, the Cyprus Shipping Industry is still able to attract  more quality  ships and shipping  companies, assisting in  reducing  unemployment in Cyprus. Shipping constitutes  one of  the  most active  and  profitable  sectors  of the  Economy. With its contribution estimated at 7% of the GOP, it remains an industry with substantial prospects, especially if we take into account that it does not suffer from any credibility or image problems and continues to operate successfully on a global basis. 2017  statistics show that, even the unstable Freight  markets globally, the revenue brought to the  Republic from Maritime Transport surpassed for a consecutive year €1 billion.

During  2017,  the  Shipping  Industry  internationally benefited from  improved freight  rates, after overcoming a long period of low  income due to the corresponding situation of  the World Economy. During the same year,  the Cyprus Economy showed  significant  growth.  The  course  Cyprus Shipping in 2017  was correctly  "navigated", due to the commendable actions undertaken by the Government and the Shipping Industry. The  outcome of these actions was the upgrading  of the Cyprus Maritime Administration, with the  unanimous approval by the Parliament in July 2017, of an independent Shipping Deputy Ministry and the creation of the position of a Shipping Deputy Minister to the President of the  Republic, essentially "writing" a new page in the  Shipping history of Cyprus.

The creation of an independent "Shipping Deputy Ministry" as of 1st of March 2018, will substantially assist towards the further development of the Cyprus Shipping and, by extension, the Economy, as well as the commendable efforts that took place the previous years, to promote  Cyprus Shipping abroad from the Maritime Administration with the active participation of the Shipping Industry.

The existing competitive shipping operational and taxation framework has proven yet again that it can be relied upon at a time of changing regulations and uncertain policy priorities in other parts of the world. The Cyprus Shipping Chamber, as the voice of the resident Shipping  Industry in Cyprus, continues to work closely with the Government in promoting both the  Cyprus flag and the resident shipping cluster.  Promotion of the new Taxation System abroad  be intensified, in order to attract more ships to the Cyprus Register and Shipping Companies to  Cyprus, as well as, the expansion of the  System with the possible inclusion of additional shipping related activities or/and additional taxation incentives regarding shipping.

In addition, a positive result of the ongoing efforts to solve the Cyprus Problem, will have obvious positive and direct  catalytic effect  with  regard to the lifting of the Turkish Embargo on Cyprus ships. The Chamber strongly welcomes the Government's efforts and is committed to continue to working tirelessly to maintain Cyprus' edge as a leading maritime centre.

For more details, you can download full report by clicking below image.