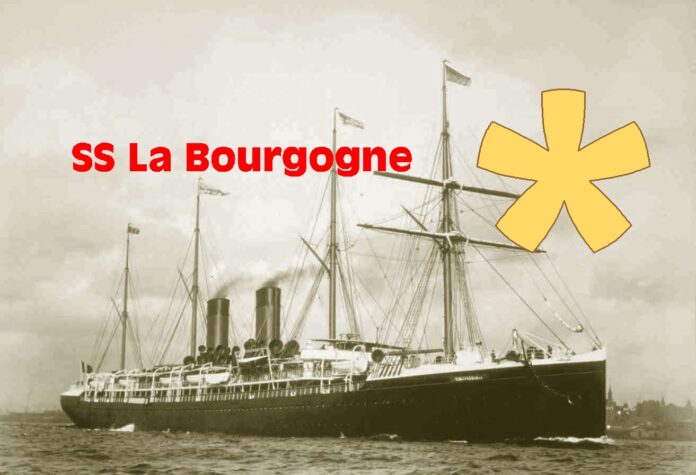 (www.MaritimeCyprus.com) The La Bourgogne was built in 1885 at the Société Nouvelles de Forges et Chantiers de Médditerranée in La Seyne-sur-Mer, France for the Compagnie Generale Transatlantique better known as the French Line. She was a sleek looking ocean liner with four auxiliary sail rigged masts and twin funnels. La Bourgogne like many other passenger ships of the era, was constructed of an iron hull and wood superstructure, propelled by a single screw propeller. Her maiden voyage from Le Havre, France to New York City was in 1886.

On July 3, 1898, at the height of the Spanish-American War, La Bourgogne left New York City for what would be the last time. She would never make it to Le Havre. About 5:00 AM in the early morning of July 4, 1898, La Bourgogne, shrouded in dense fog and pitch black darkness was passing south of Sable Island in Nova Scotia at full speed, when she was rammed by the British sailing vessel Cromartyshire. The damage from the resulting collision destroyed several starboard lifeboats and punctured a number of the compartments on La Bourgogne’s side. The bow of the Cromartyshire was destroyed. The La Bourgogne passed the Cromartyshire but soon began sinking. Before the dawn would arrive, La Bourgogne would become a terrible tragedy of horror and cowardice causing huge outrage and disgust across the United States.

The Cromartyshire originally percieved itself to be in danger. Her 21 man crew observed flares and audible whistle blasts coming from La Bourgogne. Captain Henderson aboard the Cromartyshire believed La Bourgogne was offering assistance. A half hour later, the fog rescinded enough to show a horrifying scene. The La Bourgogne was sinking fast and hundreds were still aboard the ship. The crew of the La Bourgogne was escaping in the lifeboats leaving the passengers behind to succumb to a terrible fate. Crewmembers were beating passengers with fists knives and oars brutally to keep them away from the lifeboats. A half hour later, the La Bourgogne listed completely to port and sank by the stern taking with her almost every woman and every single child.

In the aftermath of the sinking, it was said hundreds of dead bodies floated up from the now sunken ship. Hundreds were left in the water, holding on to dear life in freezing winter temperatures of the north Atlantic. Most awaiting rescue died of hypothermia. The crew of the Cromartyshire began to rescue all possible survivors. In the end, their efforts saved less than 70 of the 506 pasengers aboard, where half the crew had survived the disaster. As many passengers were American, the news soon spread around the world and caused massive outrage in the United States public and press, disgusted and horrified by the reported actions of La Bourgogne’s crew from surviving passengers. The “Kansas City Journal” went as far as to decry the French crew as demons. Making matters worse, French authorities covered up the investigation further outraging the American public.

It is most likely that the wreck of La Bourgogne has never been found. She lies in deep water over two miles below the surface, southwest of the final resting place of the RMS Titanic.

The La Bourgogne as a newbuilding in 1885 at the Société Nouvelles de Forges et Chantiers de Médditerranée in La Seyne-sur-Mer, France