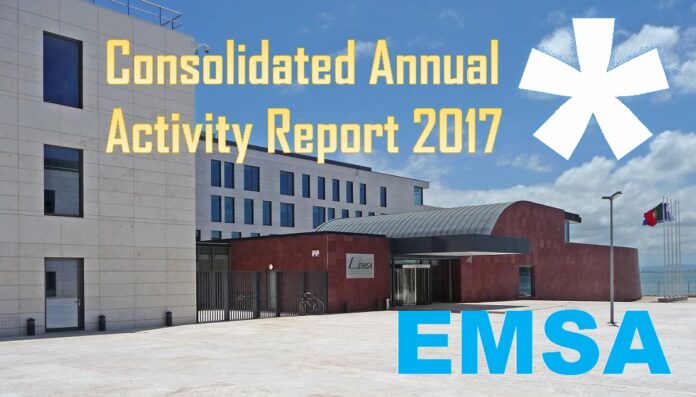 (www.MaritimeCyprus.com) The idea of a European Maritime Safety Agency (EMSA) originated in the late 1990s along with a number of other important European maritime safety initiatives. EMSA was set up as the regulatory agency that would provide a major source of support to the Commission and the Member States in the field of maritime safety and prevention of pollution from ships. The Agency was established by Regulation (EC) 1406/2002 and subsequent amendments have refined and enlarged its mandate to cover, among other measures, the efficiency of maritime transport.

The Consolidated Annual Activity Report (CAAR) is an annual reporting exercise focused on the implementation of an annual programme of work, with specifically allocated resources and related annual objectives, outputs, and performance targets.

The CAAR 2017 provides a detailed account of the actions carried out to implement the Work Programme 2017 with the resources authorized for that year, in accordance with the applicable general framework. A key element of this framework has been the first 5% staff cut provided for under the Commission Communication on the programming of resources for decentralized agencies, completed in 2016 (202 posts), and the next 5% cut for the redeployment pool, partially implemented in 2017 with minus 4 posts on existing tasks.

The legislative proposal adopted in 2016 and modifying the Agency’s mandate provided for plus 14 posts in 2017 to support the new tasks related to European cooperation on coast guard functions, bringing total posts in 2017 to 212.

Part I of the CAAR 2017 reports on the operational achievements of the year. Information is provided per activity, focusing on the added value of each activity with respect to higher level objectives. Budget and staff resources devoted to each activity are indicated, in terms of both “planned” and “actual” inputs, and performance targets and results are provided. Annex VII contains the dedicated report on the multi-annual funding of the Agency’s pollution preparedness and response activities.

Parts II, III and IV focus on the management of the Agency and the building blocks of assurance.