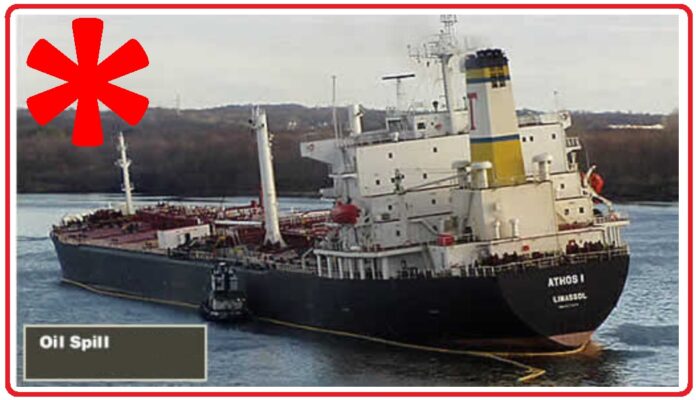 (www.MaritimeCyprus.com) The US Court of Appeals for the Third Circuit ruled on the claims of various parties concerning financial responsibility of the spill of heavy oil from the tanker Athos I into the Delaware River on 26 November 2004.

On the evening of November 26, 2004, the 60,000 dwt tanker Athos I struck an uncharted nine ton anchor on the river bed located about a ship’s length off the CITGO Asphalt Refining Company (CARCO) berth at Paulsboro, New Jersey. The single bottom tanker was holed in her Number 7 port ballast tank and Number 7 center cargo tank, resulting in a spill of 265,000 gallons of heavy crude oil. Some 280 miles of river shoreline were affected, including 70 miles heavily to moderately oiled – resulting in cleanup costs, natural resources and third party claims totaling to $300 million.

Damages totaled $143 million. Tanker owner Frescati Shipping initially paid the costs, but was reimbursed in the amount of $88 million by the Oil Spill Liability Trust Fund (OSLTF) established by the Oil Pollution Act of 1990 (OPA 90). The tanker owner and the United States then sought recovery from the companies that had contracted for the purchase of the heavy oil and designated the port of delivery.

The court affirmed the district court’s judgment in favor of the United States on the subrogated breach of contract claim, but reversed and remanded for further proceedings in light of the court’s equitable recoupment ruling for the purpose of recalculating damages and prejudgment interest. Source: US Court of Appeals