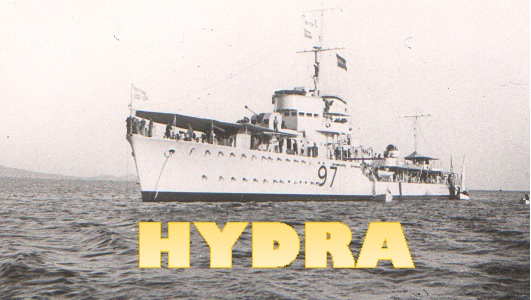 (www.MaritimeCyprus.com) Hydra was a Greek destroyer of the Dardo class, which served with the Hellenic Navy during the early stages of the Second World War. It was named after the Saronic Gulf island of Hydra, which played an important role in the Greek War of Independence, and was the fourth ship to bear this name.

She was constructed in Sestri Ponente, Italy, by Cantieri Odero, and commissioned by the Hellenic Navy in 1933. After the outbreak of the Greco-Italian War, she participated in the first naval raid against Italian shipping in the Strait of Otranto (14–15 November 1940). During the German invasion of Greece, she was attacked by German bomber aircraft on April 22, 1941 and sunk near the island of Lagousa in the Saronic Gulf, together with her commander, Cmdr. Th. Pezopoulos and 41 members of her crew.