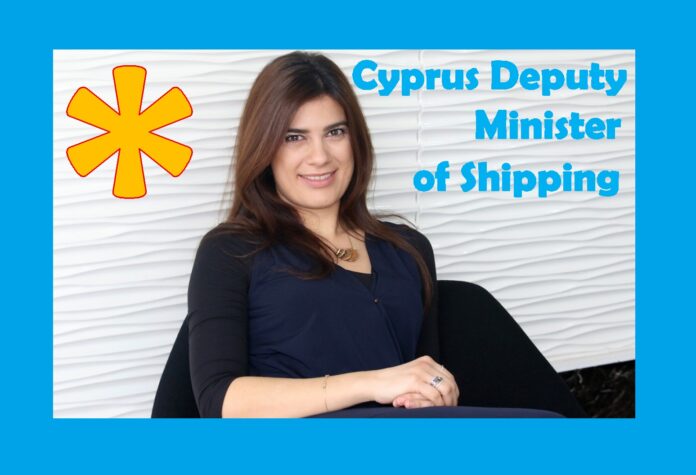 (www.MaritimeCyprus.com) CYPRUS, February 27, 2018: The President of the Republic of Cyprus has officially announced the new Ministers of the Government, and has appointed Ms. Natasa Pilides as the Deputy Minister of Shipping. Ms. Pilides is the current Director General of the Cyprus Investment Promotion Agency and will take on the newly created post from 1st March 2018.

In a clear message of political support for the shipping sector, the creation of the Deputy Ministry was unanimously approved by parliament in July 2017 and will be established as of 1st March 2018. This will be the first time that shipping has a cabinet position of its own in the Cypriot Government. Cyprus believes that there is significant potential to increase the contribution of the shipping sector to the Cyprus economy beyond its current annual 7% of gross domestic product (GDP), and this will rely on the support of a dedicated deputy minister who is wholly devoted to shipping related issues.

Ioannis Efstratiou, Acting Director, Cyprus DMS, said: “After 40 years of successful progress, the Department of Merchant Shipping (DMS) will be transformed into the Deputy Ministry of Shipping, which will take Cyprus shipping forward into a new era. The Deputy Ministry has solid foundations to build on and the staff of the DMS has the necessary knowledge and expertise to support Deputy Minister, Natasa Pilides – who will report directly to the President - in her duties.”

He continued: “Unanimously approved by all the political parties, the creation of the Deputy Ministry of Shipping highlights our ongoing commitment and support to the shipping industry, and is a big step towards the upgrading and strengthening of our shipping administration.”

Cyprus now ranks as the eleventh largest merchant fleet worldwide and the third largest fleet in the European Union. It flags over 1,000 oceangoing vessels with a total gross tonnage exceeding 23.9 million. More than 3,500 vessels are currently managed from Cyprus with a total net tonnage of around 50 million.

Natasa Pilides, Cyprus Deputy Minister of Shipping, said: “I am honoured to accept this newly created position and excited to work alongside such a knowledgeable and passionate team. We strongly believe that the transformation of the Department of Merchant Shipping to a Deputy Ministry of Shipping will increase the functionality, effectiveness, and flexibility of our public shipping administration, with a direct and immediate effect in the further development and expansion of both our flag and our maritime cluster.”

She concluded: “The ultimate goal is to strengthen Cyprus shipping and its consolidation as an advanced, global shipping service centre. We will achieve this through flexibility and speed of decision-making, the enhancement and upgrading of state services provided, the promotion of the Cyprus flag, and the strengthening of the cooperation with the private stakeholders involved.”

A multi-lingual Oxford University graduate and a fellow chartered accountant of the ICAEW, Ms. Pilides served as the Director General of the Cyprus Investment Promotion Agency (“Invest Cyprus”) for the past two years. Her work experience includes more than twelve years in the private sector, including nine years at PwC in Cyprus, Milan and London. Ms. Pilides has worked in management positions in the areas of audit, tax and consulting, providing services to multinational companies active in the fields of banking and finance, insurance, energy, construction, shipping and FMCG. She was also the Regional Chief Operating Officer for Baker Tilly in South East Europe, heading the departments of Finance, Marketing, HR, Administration, Operations and IT for Cyprus, Greece, Romania, Bulgaria and Moldova. Her experience includes training and delivering courses both for professional staff and ICAEW, ACCA and CIMA students, in the areas of audit, tax, corporate law, financial accounting and reporting with BPP, one of the leading professional studies organisations in London and internationally.