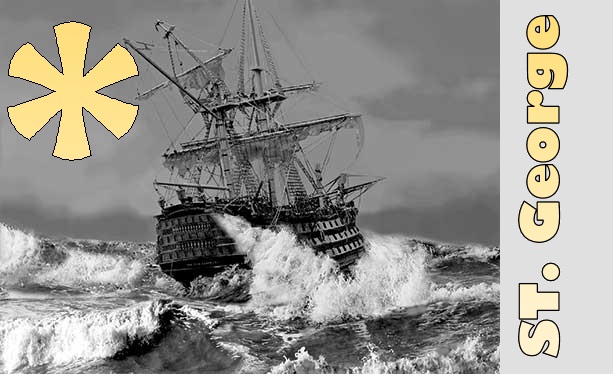 (www.MaritimeCyprus.com) The two warships, the HMS St. George and the HMS Defence, both part of the British Baltic fleet, ran aground and were lost outside Thorsminde at the west-coast of Jutland on the 24th of December 1811.

The disaster took place during the wars with England in which the St. George were Admiral Reynolds’ flagship. The St. George together with a squadron had accompanied the last convoy of the year from the Swedish east-coast through the Danish interior waters.

The St. George had suffered damages at Rødsand south of Lolland and after having been scantily repaired the ship left the Swedish skerries at Gøteborg on the 17th of December heading towards England for the winter and escorted by the ships of the line, the Cressy and the Defence.

A Christmas hurricane forced the three ships towards the west coast and only the Cressy managed to avoid running aground.

Almost the entire crew from the St. George and the Defence died – a total of almost 1300 men. It was the greatest shipwreck disaster ever on the west-coast of Jutland and a serious loss for Royal Navy which in the same hurricane lost the ship of the line, the HMS Hero and the brig, the HMS Grasshopper at Texel.

The disaster made a deep impression on people of that time and like other great shipwreck disasters it has never been forgotten.125 years after it took place the Danish press took the initiative to raise a memorial stone.

The memorial stone was revealed at a ceremony in 1937 and is standing at the Thorsminde tongue facing the position where the St. George wrecked.