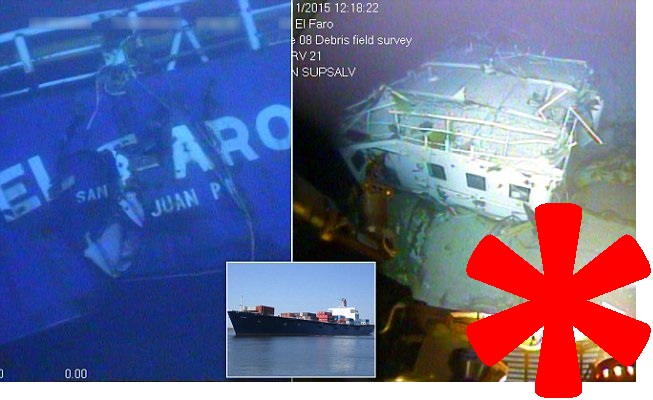 (www.MaritimeCyprus.com) The US Coast Guard released the Report of Investigation (ROI) into the loss of 33 mariners and the cargo ship El Faro on 1 October 2015 in the North Atlantic off the Bahamas during Hurricane Joaquin.

The loss of the U.S. flagged cargo vessel EL FARO, ranks as one of the worst maritime disasters in U.S. history, and resulted in the highest death toll from a U.S. commercial vessel sinking in almost 40 years. At the time of the sinking, EL FARO was on a U.S. domestic voyage with a full load of containers and roll-on roll-off cargo bound from Jacksonville, Florida to San Juan, Puerto Rico. As EL FARO departed port on September 29, 2015, a tropical weather system that had formed east of the Bahamas Islands was rapidly intensifying in strength. The storm system evolved into Hurricane Joaquin and defied weather forecasts and standard Atlantic Basin hurricane tracking by traveling southwest. As various weather updates were received onboard EL FARO, the Master directed the ship southward of the direct course to San Juan, which was the normal route.

The USCG Marine Board of  Investigation (MBI) concluded that the primary cause of the casualty was the decision of the master to navigate the vessel too close to the path of the hurricane.

Secondary factors included an ineffective safety management system within the operating company and failures by both the U.S. Coast Guard designated representative and the U.S. Coast Guard itself to provide effective oversight of the vessel’s compliance with safety regulations. The ROI is not yet final and is being forwarded to Headquarters for consideration.