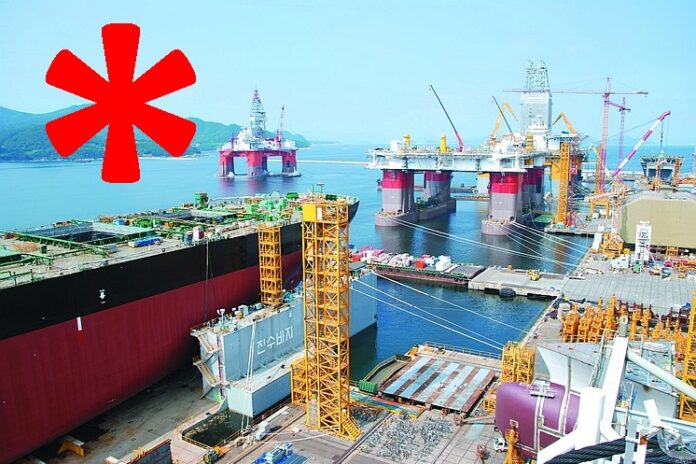 (www.MaritimeCyprus.com) Controversy over future prospects of the shipbuilding industry is rising again. This has come after Hyundai Heavy Industries lost an ultra large container vessel (ULCV) deal to Chinese shipbuilders.

According to shipbuilding industry sources on September 6, SK Securities, including analyst Ahn Young-jin, released a 52-page research paper under the title of the “Effects of global value chain changes on Shipbuilding Industry” on the 4th. The paper said global trade countries, including China, saw their global cargo volumes show a clear decreasing trend and it would reduce the number of ship orders, which are the main transport means between countries. Accordingly, the South Korea shipbuilding industry is in an extremely precarious state.

In particular, the paper pointed out that it is an “alarming movement” that Chinese shipbuilders won ULCV orders from French shipping line CMA CGM. In early August, South Korean shipbuilders, such as Hyundai Heavy Industries, competed with Chinese counterparts to win orders to build nine 22,000 TEU mega container ships consigned by CMA CGM. However, two Chinese shipbuilders, including Hudong-Zhonghua Shipbuilding, bagged the orders.

The issue was considered an “incident” in the shipbuilding industry because the Chinese shipbuilders have no experience in building container ships with a capacity of more than 20,000 TEUs and Hyundai Heavy obtained a contract from the same shipping company in the past. SK Securities expected that Chinese shipbuilders would sweep out most of orders with the price competitiveness even when the shipbuilding market conditions improve in the future.

SK Securities also said that South Korean shipbuilders will make a loss in offshore plants, which are considered a next-generation growth engine by the South Korean shipbuilding industry, even if they receive orders due to prolonged low oil prices and delay in delivery. There are no favorable factors like higher charter costs, which increase the chances of winning more orders, at the moment so the number of container ship and very large crude carrier (VLCC) orders will show a downward tendency toward the end of the year.

By contrast, the export-import Bank of Korea (Exim Bank) released a report with the title of “Shipbuilding Finance Market and Implications” on August 29 and said the volume of used ship transactions is growing and the number of new orders will increase in earnest starting from 2018. The bank said, “The new ship order market is sluggish because it is not easy to choose it according to environment regulations, not lower demand of ships. The increasing transactions of used ships are a signal of the imminent recovery of the new shipbuilding market conditions.”

The International Maritime Organization (IMO) plans to require vessels to reduce sulfur oxides (SOx) and install ballast water treatment systems starting from 2020. Considering the fact that it usually takes two years to build a ship, the new shipbuilding orders will grow from 2018 in earnest.

The shipbuilding industry believes that it will take more time for China to catch up with South Korea. It says Chinese shipbuilders haven’t signed a final contract for the “CMA CGM incident,” which results in pessimism, yet and there is no need to stretch the meaning of some issues even when they sign the final contract. Moreover, global oil majors have adapted to the prolonged lower oil prices and reformed their structure so they can make a profit even with lower oil prices.

Notably, there has been a dramatic technology innovation in the transition of major shipbuilding countries from Europe to Japan, South Korea and then China. However, China has no such technology innovation yet. For instance, Japan had a “welding technology” that was innovative in the 1960s when the shipbuilding industry leadership passed from Europe to Japan. Japan also maximized productivity with the new “block technology” when the leadership passed from Japan to South Korea. However, China has no such innovative technology yet, so it will take time to catch up with South Korea, according to the report.