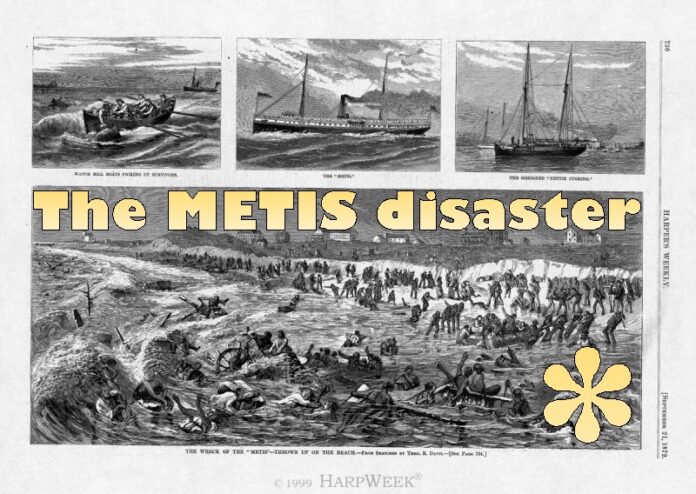 (www.MaritimeCyprus.com) During a rainstorm, the passenger vessel SS Metis, with approximately 242 passengers and crew on board collided with the schooner Nettie Cushing at about 4 a.m. on 30 August 1872 in Long Island Sound near Watch Hill, Rhode Island.

Metis, en route from New York to Providence, was holed below the waterline and flooded quickly. Passengers were assembled and many boarded lifeboats.

The captain and the agent of the Providence and New York Steamship Line refused to board lifeboats and remained in the pilot house. They were among the forty persons still alive when the vessel’s upper works washed ashore.

The Revenue Cutter Moccasin, Captain David Ritchie commanding, rushed to the scene, rescuing 45 persons and recovering 17 bodies. It is estimated that 130 persons died in the sinking.

Captain Ritchie and the officers and men of Moccasin received the formal Thanks of Congress by means of a Resolution adopted on 24 January 1873. A US Life-Saving Station was built at Watch Hill in 1879, adjacent to the Lighthouse. There was no marine insurance on Metis.

Suits were brought against the shipowner, including one by a passenger stating that he bought his $3 ticket and incurred injuries and expenses due to the sinking – he demanded $20,000 damages. The owners filed a petition in federal court seeking exoneration from and limitation of liability.